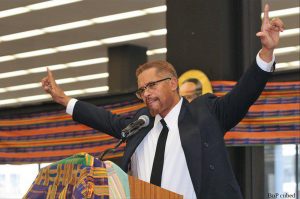 Malcolm X is still seen as one of the most controversial figures — from one of the most highly charged periods in American history. His assassination and those of JFK, MLK and RFK rocked the nation. There is nothing more revolutionary than a martyr’s cause.

His message was a “Revolution of the Mind” in which he responded to institutional racism and segregation with tactics that evolved beyond the struggle for civil rights. Instead Malcolm demanded that America restore the human rights of African Americans. He drastically changed his life from a criminal with an 8th grade education to becoming one the most powerful intellectuals in American history.

While alive Malcolm X was a polarizing figure that both energized and divided African Americans, while frightening and alienating whites. Now, over 50 years after his death, we are still coming to grips with the complexity and power of his revolutionary message. 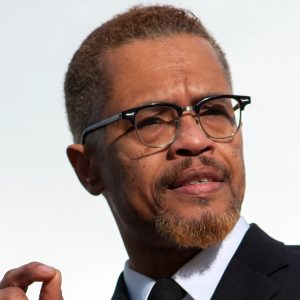 In 2007 Darrick was chosen to portray Malcolm X in the stage play, The Meeting, a fictionalized drama which questions: what would happen had Malcolm X and Martin L. King attempted to join forces. Darrick’s resemblance to Malcolm X and the his resonance with the story of the Malcolm X story was so profound that he developed a one-man show to tell Malcolm’s story. And he has been telling it ever since.

Actor, playwright, poet and author, Darrick Johnson, uses his creative talents to teach through the creative arts – to enlighten, educate and entertain. He is an advocate for change and his is a voice of hope and encouragement. He’s the Artistic Director of “By any Means Edu-tainment” featuring artists who use their creative talents to challenge and stimulate minds in hopes of influencing and transforming lives. He has written, directed and starred in In the Name of Love, and Same Goal Different View Love is Revolutionary.

About Malcolm X and The Revolution of the Mind

If anyone expressed the anger, struggle and insistence of black people for freedom in the ‘60s, it was Malcolm X. In Omaha, he was Malcolm Little, honor student. Later he became “Detroit Red,” small time street hustler. From prison emerged another Malcolm “X”, the fiery, eloquent spokesman for the Nation of Islam. After a trip to Mecca, there was a last transformation – a new willingness to embrace white allies. Who killed him and why has never been fully explained.

Born Malcolm Little, he was the son of a Baptist preacher, murdered for civil rights activism. After his mother’s nervous breakdown, Malcolm and his seven siblings were separated in foster care. Despite this trauma, Malcolm was an honor student and class president. Then, at 15, when his favorite teacher told him becoming a lawyer was not a practical or obtainable choice for a Negro, he dropped out of school surviving on the streets as a petty thief and small time hustler. (That same year Thurgood Marshall successfully argued a case before the Supreme Court.)

At age 21 Malcolm Little landed in State Prison where he was a defiant troublemaker until he noticed a fellow inmate Bimbi (John Elton Bemby) whose words and speaking skills commanded the respect of even the white guards. Suddenly the honor roll student re-emerged as Malcolm spent countless hours reading and improving his vocabulary. In prison, he studied the tenets of The Nation of Islam, which ignited his spiritual conversion.

After his release, he became Minister Malcolm X and quickly rose to become national spokesman for the Nation of Islam. His fiery rhetoric turned him into a media celebrity. After a falling out with the Nation of Islam, he took pilgrimage to Mecca where he experienced a second conversion and became “Al Hajj Malik Shabazz” whose message was no longer just for African Americans, but for all humanity.

“The future belongs to those who prepare for it today.”

Malcolm reminded his followers that their revolution was a “Revolution of the Mind.” Once this began, the rest would follow – leading not only to the liberation of Black people, but also to the liberation of a nation. Like his contemporary Martin Luther King Jr, Malcolm also “had a dream.” Malcolm’s dream started in anger, fostering Black independence on the shoulders of retaliatory separation. It ended with the acceptance of a unified brotherhood and the replacement of anger with peace and a quest for international equality for all mankind.

“I am not a racist. I am against every form of racism and segregation, every form of discrimination. I believe in human beings, and that all human beings should be respected as such, regardless of their color.”

1960’s America was prosperous but lived in fear – fear of communism, fear of nuclear war, fear of cultural change, and fear of black empowerment. Malcolm X was passionately committed to being heard over these fears. Although the mainstream media deemed him a hate teacher and a racist, he did not advocate violence or initiate acts of aggression towards anyone. He did believe in self-defense and that Black people in America were well within their rights to protect life and property “by whatever means necessary” – especially when their government was unable or unwilling to protect them. Malcolm argued that the Black struggle was not for Civil Rights, but rather for Human Rights as fellow citizens of the United States of America and the world.

“It’s time for martyrs now, and if I am to be one, it will be for the cause of brotherhood and this is the only thing that can save this country.” (Feb. 19, 1965 – 2 days before his assassination)

The shots that killed him on February 21, 1965, as he stood on a podium in New York’s Audubon Ballroom, tore through his chest and resounded around the world. Black America stood lifeless as supporters wheeled his bullet-ridden body towards the closest hospital. An ambulance had been called, but none came. No one among the conspirators who plotted his death, or the authorities whose silent complicity assisted his murder, could have imagined or predicted that anyone would be still talking about Malcolm X fifty years after his death. Who knew that the history of a man they viewed as the most dangerous in America would enjoy such longevity?

Malcolm’s life was a battle of ideas in which he responded to institutional racism and segregation with tactics that evolved beyond the struggle for Civil Rights. Instead Malcolm demanded that America restore Human Rights. Malcolm spoke of the frustrations of many who no longer believed in turning the other cheek. Instead he drastically changed minds. He changed his life from a criminal with an 8th grade education to become one the most powerful intellectuals in American history. The revolution that Malcolm X fueled was a Revolution of the Mind.

“If you don’t stand for something, you will fall for anything.”