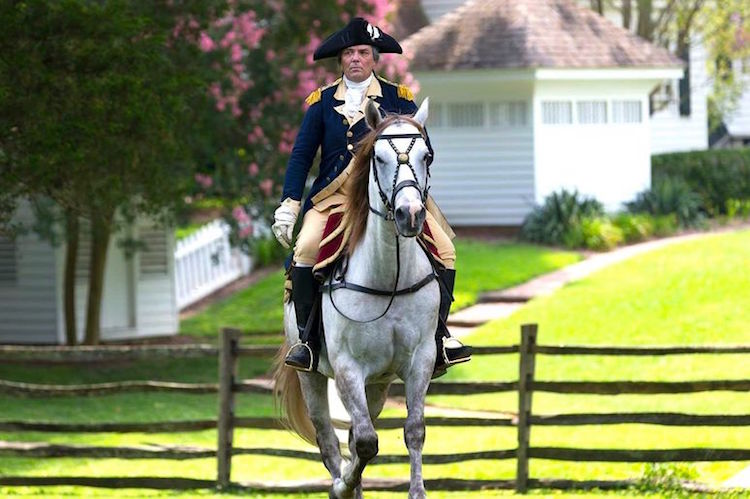 Get ready to flat out be inspired as you meet – President George Washington. Fearless in battle and also a canny political genius, Washington could have been King, but he chose to be a citizen.

How can one be a great military leader without being a gifted tactician or strategist? Washington’s character, judgment, industry and meticulous habits, as well as his political and diplomatic skills, set him apart from others.

Some of Washington’s most courageous acts occurred after the battles were over and the creation of a nation began.

You’ll laugh – you’ll be amazed – you’ll have lots of questions. And George Washington will answer them. 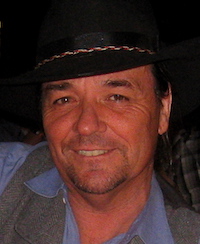 Ron Carnegie has been an historical interpreter since 1979, all of his adult life. He started at California’s Living History Center portraying various people of Elizabethan England. He also worked for various museums and sites in California as an independent contractor. Some of these sites include Fort Tejon State Park, The Los Angeles Master Chorale, The Los Angeles Museum of Natural History, and Pia Pico Adobe. Since 1995 Ron has been employed by the Colonial Williamsburg Foundation, performing as George Washington since 2005.

The George Washington role is exceptionally challenging and is surrounded by so many personal feelings, cherished myths and misconceptions . A daunting task indeed. Ron brings to it his high intelligence, dry wit, studious research, dedication, professionalism and period flair.

The Unwavering Bravery of George Washington

“The right wing, where I stood, was exposed to and received all the enemy’s fire … I heard the bullets whistle, and, believe me, there is something charming in the sound.”

This letter to his brother John Augustine and was written just after Washington’s first military encounter. Only 22 years old at the time, these words mark a bravery that would be displayed over and over again in Washington’s several years of Public Service. Perhaps the most obvious aspect of this is his physical bravery, but he displays great moral and social bravery as well.

A year after Washington’s reputation had been destroyed by the disaster of Fort Necessity, he convinced British General Braddock to appoint him as an Aide to Camp. Ambushed along the Monongahela, the British found themselves in yet another disaster. In the confusion of the situation and with most of the Officers dead or wounded young George took up the responsibility of command. The Virginians put up a defense and allowed for a fighting retreat. When they were finally out of harm’s way, Washington would recount that he had three or four holes in his regimental coat, and that two horses had been shot out from under him.

There are several similar accounts from the American Revolution. Just his rank alone put him at great risk; Washington stated that “my life is irrevocably entwined in our cause.”

Much talk is made of what would have happened to the signers of the Declaration of Independence had the cause failed. There is no need to speculate with Washington. His fate would certainly be death. Only two letters between George and Martha survive. The first is the letter informing her of his commission as General and Commander in Chief of the Continental Army – it includes a will.

With all of the accounts of Washington’s bravery and lack of concern for his personal safety on the battlefield it is, in my opinion, just as important to remember his bravery demonstrated by leaving his comfortable retirement to take the position of President of the United States. Washington always held his reputation as one of his most valued possessions. He had lost it once, rebuilt it, and then with the victory against the British seen it shine ever brighter. He didn’t need to do anything more to assure his place in posterity, and taking upon himself the role of President could certainly see it tarnished if all failed.

Similarly, often his decisions as President were guided by difficult choices based upon his interpretation of the Constitution. Washington was well aware of the unprecedented nature of his role and that any misstep could prove fatal to the Union, or to the Constitution, or to our liberties. His decisions were with posterity in mind, rather than his personal opinions, friendships or desires.

George Washington, while sometimes reluctantly, took on all of these challenges as they were presented, and perhaps in his greatest display of bravery, he steeled himself for “whatever Providence might have in store.”

1738: Washington family moves to Ferry Farm (a plantation on the Rappahannock River near Fredericksburg); George Washington spends most of his youth here

1749: George Washington is appointed county surveyor of the frontier county of Culpeper.  He was seventeen years old.

1755: Washington returns to the Ohio frontier as a volunteer aide for General Braddock.  During a battle between the French and the British near the Monongahela River, Washington exhibited great courage and leadership.  He was later recognized for his conduct in battle with a promotion and was given command of the entire military force of Virginia.1759: On January 6, 1759, George Washington married Martha Dandridge Custis.  A native of the Tidewater region of Virginia, Martha Custis was a young widow who had inherited an enormous amount of wealth after the passing of her first husband, Daniel Parke Custis, and was the mother of two young children, Jacky and Patsy.  Following their marriage, the newlywed couple, Jacky, and Patsy moved to Mount Vernon.

1759-1775: George Washington was a Gentleman Farmer at Mount Vernon in the years between his marriage to Martha and the onset of the American Revolution.  Washington experimented with different farming techniques while also expanding his home at Mount Vernon.

1775: The newly formed Congress appointed George Washington to be the commander of the Continental Army.  Washington would hold this position for the entirety of the American Revolution, totaling eight years.

1783: Following the end of the American Revolution, Washington addressed Congress on December 23 in Annapolis and resigned his commission.  Through this action, Washington gave the power back to the people and was declared a hero around the world.

1787: Although determined to retire from public life after the Revolutionary War, Washington enters the public sphere and is unanimously elected president of what is now known as the Constitutional Convention.

1789: George Washington is unanimously elected as first President of the United States

1797: Refusing a third term, Washington retired from the presidency and all public life.  By leaving office after two terms, Washington set a precedent that has been held to by most of the American presidents who followed him.  He returns to Mount Vernon and enjoys a peaceful retirement.

1799: George Washington passed away on December 14 from a throat infection called epiglottitis in his bedroom at Mount Vernon. He was surrounded by close friends and his loving wife Martha.