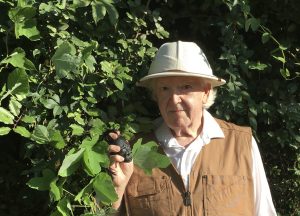 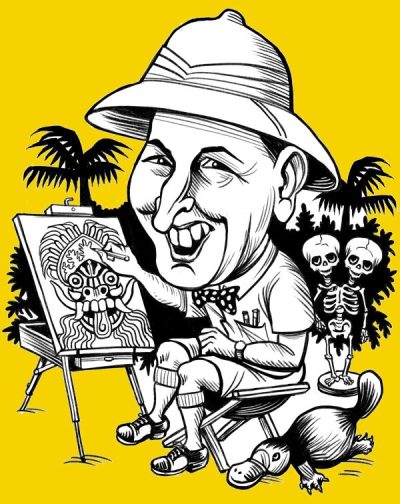 Robert “Believe It or Not!” Ripley lived an unbelievable life.

A barefoot and bucktoothed stuttering boy became a radio, film, and television celebrity who was voted “the most popular man in America.”

A reluctant writer who dropped out his senior year of high school became a best selling author and a world renowned journalist.

A nonstop doodler who was told he would never be an artist became a newspaper illustrator earning more than $500,000 a year – during the Great Depression!

Ripley travelled the world finding and reporting the oddest and most unusual facts about people, places, and events. Often controversial, sometimes shocking, and always entertaining, Robert Ripley created a media empire that survives and thrives more than 70 years after his death – believe it or not! 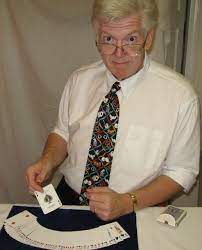 Larry has performed on the Greenville Chautauqua stage since 2002. He has portrayed Einstein, Churchill, Disney, Houdini and Cronkite, among others, but recreating Robert Ripley holds a special place in his heart. Since 1973 Larry has worked as a professional magician, including 8 years appearing with Ripley’s Believe It or Not! in Gatlinburg and Myrtle Beach and 3 years as a theme park magician in Kentucky. Over the years he has presented thousands of public, private, and corporate magic shows.

Robert “Believe It or Not!” Ripley had an eye for the unusual, the strange, the weird. He was curious about the curious and, remarkably, he was able to share his unique view of the world in such a way as to inspire the passions and wonder of others. He celebrated the diversity of humanity and the incredible achievements of which they were capable. For decades his newspaper column became a goal for some to work to appear in and for others to work (unsuccessfully) to disprove. Ripley created a legacy that still educates, entertains, and surprises over 70 years after his death – believe it or not!

Robert Ripley was an artist, a journalist, a globe-trotting explorer, an international celebrity, a bestselling author, and a star of radio, film, and very early television. He married a teenaged beauty queen/movie star, and he lived a life of luxury on a private island surrounded by beautiful women and one of the most unusual assortments of bizarre souvenirs and oddities ever collected. But what was the secret of his phenomenal success?

How did a poor, bucktoothed, and barefoot boy born in 1890 in the backwaters of Santa Rosa, California rise to such international fame?

Ripley began as an incessant doodler who dreamed of playing professional baseball. He did play semi-pro ball, but an injury ruined his professional tryout with the New York Giants. He would go on to take up handball and become the New York City handball champion. He claimed that “slapping a ball” was the most natural thing in the world.

With sports as his focus, he developed as a talented, self-taught cartoonist and sports reporter. Newspapers of his era preferred crisp, lifelike drawings of sporting events to the grainy and blurred action photos available at that time. Ripley found employment with several newspapers in Northern California starting at $6 a week before moving to New York at the age of 23 to work at the New York Globe, where he was hired at $25 a week.

Ripley rubbed shoulders with the finest newspaper illustrators in the country. He analyzed their assorted styles and developed a style of his own. This was the time when the newspaper publishers Pulitzer and Hearst vied for supremacy and the sensationalistic style known as “yellow journalism” became the standard. Ripley became sensational at being sensational.

From the beginning he was fascinated by sports records. Who was the fastest? Who ran the farthest? He began collecting obscure records for his articles to use during the winter months when sporting events were scarce. He took note of records like jumping backwards the farthest and hopping the 100 yard dash the fastest.

Sports reporting expanded Ripleys world. He traveled to Reno, Nevada, in 1910 for the Jim Jeffries/Jack Johnson heavyweight championship “fight of the century” and illustrated the boxing defeat of the “Great White Hope.” He journeyed to Belgium for the 1920 Olympics and illustrated American victories including the controversial swimming gold medals of American/ Hawaiian Duke Kohanamoku – controversial only because of his brown skin. When Ripley visited Hawaii on his first world tour, Kohanamoku taught Ripley how to surf, a sport Kohanamoku popularized.

In 1918, during a slow sports day, Ripley created what he would consider his first cartoon of the odd and unusual, but Ripley called it “Champs and Chumps.” Over the next several years his cartoon would slowly develop under the name “Believe It or Not!”

Ripley, the Modern Marco Polo, began his first truly global adventure in 1922 when he was dispatched on a round the world tour. He sent back stories of his experiences, descriptions and illustrations of the people he met and the foods he ate. In other words, he became one of the world’s earliest, most widely read bloggers. In time Robert Ripley would visit over 200 countries. He reported the customs, fashions, religious practices, and exotic happenings he witnessed. He exposed an isolated American public to the cultures of the rest of the world – always with a sly sense of the dramatic and the unusual.

Ripley envisioned bringing his growing collection of the exotic and bizarre to a paying American audience. He opened his first Odditorium in the Chicago World’s Fair displaying shrunken heads, a Fiji mermaid, and assorted living curiosities. Ripley became the 20th century P.T. Barnum, but one who never fooled people.

Ripley was in such growing demand that he was hired by William Randolph Hearst in 1929 for his King Features newspaper syndicate for $100,000 a year.

The success of “Believe It or Not!” depended in large part on Ripley’s relationship with his audience. Readers submitted their own unique stories, which broadened the range of his collection of oddities. Readers challenged the truth of Ripley’s stories labeling him a liar. Letters poured in establishing a record for Ripley himself for receiving more mail than anyone else in the world!

In the 1930s, Ripley produced weekly radio programming drawing an ever bigger audience. By the end of the ‘30s, his staff had grown from one talented researcher named Norbert Pearlroth, into a large staff of secretaries and researchers. Ripley was now earning an annual salary of $500,000.

After the Second World War, Ripley pioneered the first 13 episodes of a successful television show as well. Yet regardless of the medium, Robert Ripley drew an audience that wanted to be amazed, surprised, or horrified as they learned about the world around them.

Ripley’s father and mother had died of heart ailments at ages 50 and 46. Ripley suffered a fatal heart attack in New York at age 59. He was buried near his parents in his hometown of Santa Rosa, California, in the Oddfellows Lawn Cemetery – believe it or not.

1939 – voted the most popular man in the USA and opened a permanent Odditorium in New York’s Times Square.

Believe it or not!

I have traveled to 201 countries including Hell, and the strangest thing I’ve seen was Man. [Note – Hell, Norway]

Some of the most wonderful things in the world will seem dull and drab unless you view them in the proper light.

I think that mine is the only business in which the customer is never right.

Lindbergh was the 67th man to make a non-stop flight over the Atlantic Ocean!

Barnum was wrong. The public doesn’t like to be fooled. And I am happy to say I’ve never fooled my public. Not that the public always thinks so.

It makes me happy to be a success in radio, for it’s the last thing I’d ever image I could do.

Ripley, Robert. Believe It or Not! Stanley Paul and Co., 1928. Ripley’s original collection of his oddities and surprises.

“Ripley’s.” Ripley Entertainment Inc., 2022.  https://www.ripleys.com This is the modern successor to the Ripley entertainment empire of the odd. It features multiple Ripley media and daily Ripley’s “Believe It or Not!” cartoons.

Sloan, Mark, et al. Dear Mr. Ripley – A Compendium of Curioddities from the Believe It or Not! Archives. Bullfinch Press Book, 1993*. A well illustrated exploration of the people who appeared in Ripley’s Believe It or Not! as living curiosities.

Thompson, Neal. A Curious Man – the Strange and Brilliant Life of Robert “Believe It or Not!” Ripley. Three Rivers Press, 2013*. This is the most comprehensive biography and a very entertaining read.