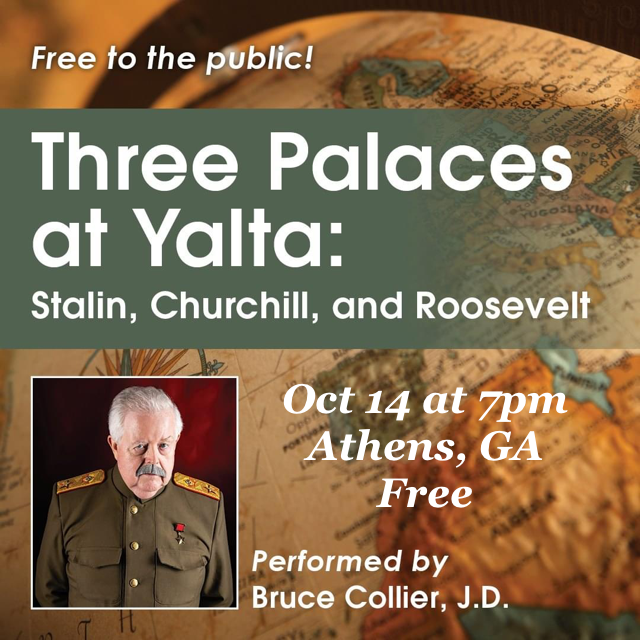 The war to surely end all wars was finally at its close. The earth had been ravaged and her people spent. Enter Churchill, Stalin, and Roosevelt, the leaders of the three great powers still standing. It was time for these gentlemen to meet. Face to face. What peace might they imagine? What spoils would these victors demand? What memories would never die?

All guests must present ONE of the following for entry (photocopies of test results will not be accepted):
. Original vaccination card or clear photocopy
. Signed health & safety affidavit + temperature check
. Negative COVID test (from within 72 hours of event)

Bruce Collier, the starring attraction of the Three Palaces at Yalta’s live performance at the Classic Center’s October 15 event, will be flying solo, playing all three leads—Josef Stalin, Winston Churchill, and Franklin D. Roosevelt—in this historic reenactment at the end of World War II against the backdrop of the Crimea Sea.

He hails from Dayton, OH, where he practiced law as a public defender. Bruce has acted professionally in Ohio, at the Alabama Shakespeare Festival, and in New York, where his original play, Tarts, was produced at the Courtyard Playhouse in Greenwich Village. Presently a resident of DeFuniak Springs in the Florida Panhandle, Bruce has acted at The Seaside Repertory Theater and the Emerald Coast Theatre Company, where his Through the Storm premiered.

He is also developing an international clientele as a voiceover artist and has voiced Franklin D. Roosevelt in a short documentary for the FDR Presidential Library and Museum in Hyde Park, NY. Bruce has performed as Churchill at the Florida Chautauqua Assembly in two previous seasons. He has also written a one-man, three-character play, Three Palaces at Yalta, in which he portrays Josef Stalin, Winston Churchill, and Franklin D. Roosevelt, which premiered in January of 2021 as part of the Emerald Coast Theatre Company’s Storyteller Series.

Bruce is also Editor of the DeFuniak Springs Herald – Beach Breeze, a weekly newspaper that has been published continuously in Walton County, FL since 1888.

Three Palaces at Yalta is set in February of 1945, at the Crimean resort town of Yalta. The Second World War is drawing to a bloody conclusion in Europe, with the armies of Adolf Hitler’s Third Reich being driven back on all fronts to Berlin.

The “Big Three” of the Allied heads of state, Marshal Josef Stalin of the USSR, Prime Minister Winston Churchill of the United Kingdom, and President Franklin D. Roosevelt of the United States, have gathered for a “summit” to discuss strategy and policy. Each leader is housed in a former Imperial Russian palace, Yusupov, Vorontsov, and Livadia, the settings for each act.

In each of the three acts, Stalin, Churchill, and Roosevelt respectively voice their plans, concerns, and aspirations. Of particular interest to them is the future of Poland, whose invasion by Germany in 1939 ignited the global war, and which has become a symbol of potential conflict in post-war Europe. The three palaces also represent Fear, Honor, and Hope, aspects of the motivations and character of the statesmen who occupy them.