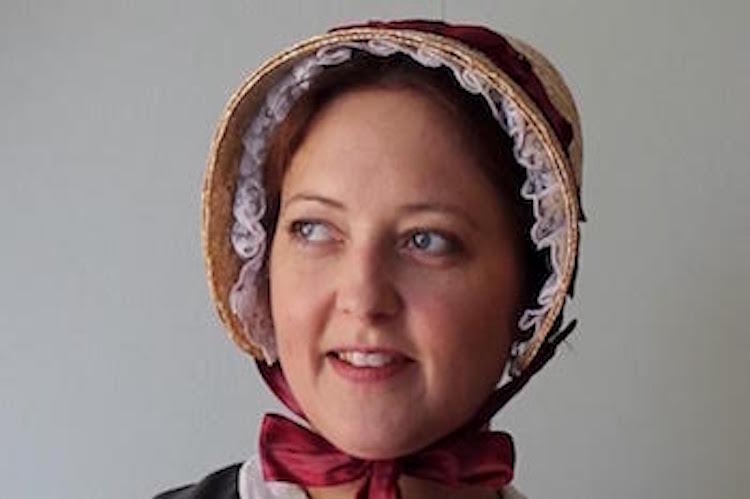 When remembered at all, Clara Barton is remembered as the founder of the American Red Cross, one of the world’s premiere medical aid organizations. Her Civil War efforts inspired that work and transformed her – and other Americans’ – beliefs about women’s competence and role in society.

In overcoming ingrained convictions about female propriety, she helped bring about profound changes in American women’s lives, especially nursing, which became an acceptable profession for women after the war. What is more, the war gave Barton a chance to prove that she had character, firmness of purpose and a determination to expand the limits of what was possible.

A resident of the Chicago area, she holds both a master’s degree in theater and a doctorate in American studies and women’s history. A former museum director, she is the author of two books on Chicago history and currently works full-time as a public speaker, living-history presenter, and author. www.lesliegoddard.info

During the battle of Antietam in 1862, Clara Barton was working at a temporary hospital set up in a farmhouse close to the battlefield. The surgeons there had been using corn leaves as bandages until she arrived with wagonloads of bandages, food and other supplies.

While assisting surgeons, Barton heard a wounded man begging for water. She fetched a cup and held it to his lips. Suddenly, she felt a twitch in her sleeve and the soldier jerked back. A bullet had ripped through her sleeve and landed in his chest, killing him instantly.

The extraordinary courage she showed that day, and at many other bloody locales during the American Civil War, earned Clara Barton the nickname “Angel of the Battlefield.”

It was an inspiring achievement for a girl who grew up as the youngest, and shyest, of six children. She worked for several years as a teacher and even opened a public school in Bordentown, New Jersey in 1853.

But Barton quickly began pushing against traditional gender expectations. When school officials in Bordentown refused to promote her to principal because of her gender, she resigned.

She moved to Washington D.C. and found a prestigious position as a clerk in the U.S. Patent Office.

When the Civil War broke out in 1861, Barton was appalled by the lack of preparation, especially after the first Battle of Bull Run, when many wounded soldiers were sent back to Washington without receiving any medical care.

Although she had to struggle “long and hard with my sense of propriety,” Barton successfully petitioned the government for permission to bring her supplies battlefields personally, usually staying on to distribute them and to nurse the wounded.

Barton was present at some of the bloodiest battles of the Civil War including Cedar Mountain, Second Bull Run, Antietam and Fredericksburg. Once, when a shell hit the door of the room in which she was working, she did not flinch but simply continued her work.

In 1865, as the war was winding down, she obtained permission from President Abraham Lincoln to help relatives locate missing soldiers by searching among prison rolls, parole logs and casualty lists. At her insistence, anonymous graves at Andersonville military prison in Georgia were identified and marked.

When her war service ended, Barton traveled to Europe for rest, where she became aware of the new International Red Cross and assisted its efforts during the Franco-Prussian war.

She founded the American Red Cross in 1881 and led it for the next twenty-three years. Clara Barton died on April 12, 1912, at her home in Glen Echo, Maryland.

Civil War histories rarely give Barton the attention she deserves, though many at the time considered her the outstanding battlefield nurse and relief worker in the war. Her pioneering efforts opened up new opportunities for women, especially in nursing.

Even more remarkably, she did her work independently, without any organizational affiliation or official government appointment. As her biographer Stephen Oates put it, “Nobody else had done as much as she in acting as an individual conduit between the home front and the needy soldier on the battlefield.”

Driven by her own will and determination to cut through bureaucracies, she overcame “fearful odds” against a woman serving in the field in wartime and caring for wounded and seriously ill men without compromising her status as a “lady.”

And her example lives on. In the years since 1881, millions have volunteered with the American Red Cross, providing humanitarian and disaster relief across the nation.