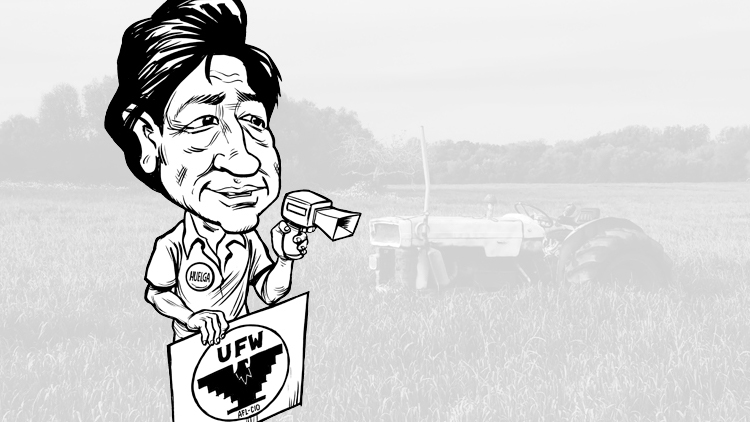 Join the Movement and march for social justice with Cesar Chavez and the United Farm Workers.

Journey back to the turbulent 60’s and experience a message of non-violence and equality bringing hope to rich and poor alike, empowering all to take charge of their lives. “Si, Se peude.” 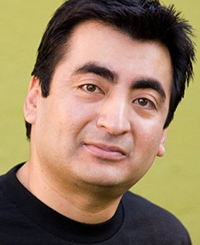 Fred is a Los Angeles based actor with a solo show based on the life of Civil Rights leader Cesar Chavez. Having written and developed this piece from interviews and extensive workshops, the show now tours internationally.Active in theatre for 20 years, Fred has appeared on stage and screen. He has performed with the national touring troupe, Traveling Lantern, and the rebellious guerilla theatre troupe, The Bad Puppets. Featured on radio and television, his solo production The Stories of Cesar Chavez has reached general theatre audiences internationally and continues to provide educational outreach throughout the country. He has worked with the LAUSD and L.A. County Office of Education bringing theatre into classrooms for many years. In juvenile halls nationwide he demonstrates the power of art and provides students who are incarcerated a forum to discuss relevant social issues. In addition to his theatrical show, The Stories of Cesar Chavez, he speaks as Chavez for the Chautauqua lecture series that is featured around the country. The play earned him BEST OF Fringe in London Ontario, and the prestigious BRICKENDEN Award for Best Touring performance in London.  He has brought it to the famed Chicano theatre, Su Teatro in Denver, CO and The National Hispanic Cultural Center, in Albuquerque, NM. Fred toured the national theatre festival circuit with runs in Hollywood, Boulder, Minneapolis, Fresno and New York. As well as receiving BEST OF Fringe for his performance at the San Francisco Fringe Festival, he annually tours his solo adaptation of the classic, A Christmas Carol, and currently produces various variety acts throughout Los Angeles.

Growing up in Arizona near Yuma’s Gila Valley River, Cesar and his family knew poverty but not destitution. Cesar’s parents, Librado and Juana, instilled many key values in their children, including a strong family core. Through everything their family survived because their family stayed together. Through thick and thin.  A devout Catholic, Cesar’s mother was known for her many proverbs or dichos, which she used to emphasize the importance of charity, respect for others, and nonviolence. Cesar would later use these sayings in his own down-to-earth style, “God gave you senses and a mind and a tongue, so that you can get out of anything,” and “he who holds the cow being killed, sins as much as he who kills her.”  Juana Chavez was an uneducated woman but very wise.  And from her, Cesar learned the value of simple and direct wisdom.

With the advent of the Great Depression, the family eventually lost everything.  As conditions became worse they were forced to join the masses and head west in search of migrant farm work in California. The Chavez property was sold at a public auction and eventually fell into the hands of the company that would later become part of Bruce Church Inc., a giant vegetable company. As Cesar would say, “If we’d stayed there, possibly I would have been a grower….God writes in exceedingly crooked lines.”

After completing the eighth grade in Brawley, California, Cesar was forced to leave school when his father suffered a serious automobile accident, and Cesar had to work full-time to help support the family. He later committed himself to self-education, reading everything he could find, including the writings of Gandhi and St. Francis of Assisi.

In 1952, Chavez joined the Community Service Organization (CSO), a community redevelopment group whose aim was to find ways to eradicate poverty in Latino neighborhoods. Here is where he learned to organize and strategize. Later he would found, The United Farm Workers (UFW).  Rather than a traditional union he envisioned a social movement – a crusade that he later called “ El Movimiento” (The Movement) that would inspire farm workers to organize themselves and change their lives.  And though many people liked saying that it was his union, his commitment was in empowering a people to take charge of their lives and provide for themselves with a union that they could very easily say was theirs.

In his crusade for equality for farmworkers he became spokesperson for the equal rights of every man. As the union grew so did his popularity as a new civil rights leader. Spreading his message of peace and equality during the turbulence of the 1960’s brought hope to people rich and poor alike. Reaching people in the fields and union meeting halls and college campuses everywhere. As people watched him engage in pilgrimages and fasts they were reminded of the importance of patience and non-violence. The urgency of what needed to be accomplished never tempted him to falter, or to resort to what was easier. For Cesar Chavez, the goal of a social justice movement was to challenge the myth of violence by showing that there are other ways to develop power and authority.

Cesar believed that violence is a sign of weakness, and not an indication of strength or power.

One of Cesar’s greatest virtues was patience. He always knew a nonviolent struggle would not be easy. If the people were to succeed in their struggle, he knew it would take years of sacrifice. Which would require unending patience. Something that came easier to him but harder for most. This is where his challenge would lie.

Cesar Chavez never believed in the concept of means and ends. He believed that everything that one does in life is an end, in itself. So, by making ones actions the kind that they would be willing to be judged on, would prepare them for the adversaries that would constantly provoke them in their struggle.

For Cesar fasting was a very personal thing. Though he engaged in them throughout his career for the cause he felt compelled to fast to purify his own body, mind and soul. He never did them out of a desire to threaten anyone or make anyone feel guilty. They were always very spiritual and meant as a way to communicate a message to people.