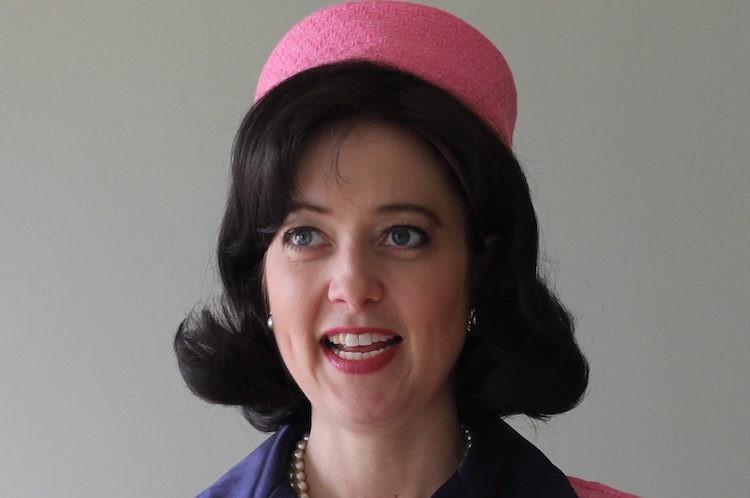 One of the most photographed women of the 20th century, Jackie Kennedy mesmerized foreign leaders and the American people with her style and sophistication, creating a White House renowned for its beauty and culture. At the same time her youth, privileged upbringing and highly public marriages made her instant tabloid fodder.

In her whirlwind ten-year marriage in the public eye, she gave birth to two children, miscarried one, and bore a daughter stillborn and a son who died just three months before her husband was assassinated. Her husband’s murder left her soaked in his blood and brains. At JFK’s funeral she bore the weight of the nation’s grief. Her widow’s weeds became a symbol of our own pain.

There is something mysterious and private about this very public person. Was she mythmaker of her husband’s legacy or shell shock PTSD survivor? How did America survive a decade of unprecedented political assassination and unpopular war? How did democracy survive the Revolutionary ‘60s?

People around the country stopped in their tracks, unable to believe that this vigorous young president, just forty-six years old, was suddenly dead. It shocked the nation to its core and shook the faith of many Americans in their institutions and way of life.

The wave of grief that swept across America was one measure of how his death seemed to signal a revolution in our understanding of ourselves and our place in the world. It felt like the annihilation of the New Frontier, the soaring modern agenda J.K.F. had laid out to eradicate poverty, take Americans into space, and solve the problems of world peace.

In the weeks following the assassination, many grief-stricken Americans embraced the myths and legends that grew up around John F. Kennedy. And of these myths, none has endured as powerfully as that created by his widow.

One week after the death, Jackie Kennedy asked a trusted journalist to visit her in Massachusetts. She wanted him, she said, to help her tell the world that her husband was someone special, that his presidency marked a distinctive era, “one brief shining moment known as Camelot.”

The writer, Theodore H. White, recognized her words as a political spin act but went along, writing up a brief “Epilogue” that laid out forever the myth of the Kennedy era as Camelot.

The young widow, just 34 years old at the time, knew White because he had written sympathetically about her husband for LIFE Magazine. She also knew that “Camelot” would resonate deeply with Americans, and that LIFE could be counted on to help her shape her husband’s legacy. And she was right. Our image of him to this day tends to reflect more her image of J.F.K. as a consummate liberal idealist than as the more hardheaded, pragmatic politician he was.

Although she used the word “Camelot” only after the assassination, Jackie had been working to shape the image of her husband’s administration from the moment he was elected. In her historic preservation efforts, her support for the arts, her fashion, and her entertaining, she worked hand-in-hand with the New Frontier politicians, using thoughtfully considered imagery to shape public opinion.

For her husband’s inauguration in January 1961, Jackie wore a beige coat with a matching pillbox hat that contrasted starkly with the heavy furs worn by the women around her. Compared to them, she looked strikingly youthful and glowing. She and her husband, who wore no overcoat during his inaugural address, gave visual proof of the new generation assuming leadership.

Widely reproduced photographs of the Kennedys show them playing with their children. Although they look candid, the photos were often carefully staged, with professional lighting and styling. Even so, those photos, more than fifty years later, retain their allure.

Jackie’s most visible undertaking as First Lady was her restoration of the White House, aimed at showcasing its historical legacy. The project captivated the nation. Her televised tour of the White House in February 1962 drew a staggering 56 million viewers.

Unquestionably, much of Jackie’s appeal was due to her youth (she was 31 at the time of JFK’s inauguration) and her modernity. She waterskied, danced the twist, and traveled on her own to India and Pakistan. But much of it also sprang from her flair for capturing the soaring, optimistic energy of her husband’s administration.

Yet Jackie’s most powerful mythmaking happened following her husband’s death. After leaving the hospital where he died, she refused to take off her pink Chanel-style suit. “Let them see what they’ve done,” she said.

She wore the suit, visibly splattered with blood, through Lyndon B. Johnson’s swearing-in ceremony, on the flight home, and back to the White House. (That suit, never cleaned and preserved today in the National Archives, retains its emotional power as an emblem of that day’s trauma.)

Over the next three days, Jackie oversaw every detail of her husband’s funeral, from the lying-in at the U.S. Capitol to the black riderless horse in the official funeral procession.

She insisted on walking in the procession herself, despite Secret Service fears that other world leaders would feel compelled to walk as well, creating a massive security risk. “I don’t care what all the others do, I’m walking,” she replied.

Glued to their televisions, millions watched as Jackie emerged from the White House, wearing a long black veil, and walked in regal dignity to the funeral.

As Jackie Kennedy intended, that funeral revolutionized our understanding of her husband’s death.

The image of the proud Kennedys, marching together in shared grief with the nation, transformed the meaning of his assassination. It no longer symbolized just wrenching trauma but also deep abiding pride. Overlaid with the symbolism of Camelot, the funeral became an acknowledgment of John F. Kennedy’s accomplishments and a commitment to ensure that the high hopes he embodied would endure into the future.

It was her final act of myth-making for her husband, and its power endures to this day.