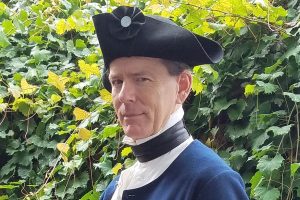 Join the crafty and elusive, Francis Marion as he “out-foxes” the British in the American Revolution. Marion’s devastating guerrilla warfare earned him the title of “Swamp Fox.” Although virtually in a sea of enemies, Marion and militia leaders Thomas Sumter and Andrew Pickens kept resistance alive in South Carolina until the Continental Army could recapture the region.

Meet the Man behind the Myth, the unquestioned leader of, as Dr. Walter Edger pointed out, “a ragged band of both black and white volunteers” who just kept fighting until the Revolution was won. 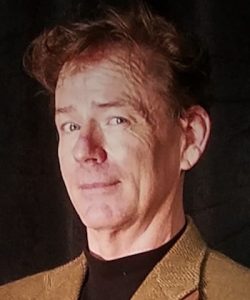 Ken Johnston is the Curator of Education at the Northeast Georgia History Center and has performed as an historical interpreter since his teen-age years. He graduated from LaGrange College, receiving the Ingrid Bergman Scholarship and the Irene Arnett Drama Award. He has done Museum Theatre and Historic Character Interpretation for Colonial Williamsburg, Mount Vernon, the Smithsonian’s National Archives, National Portrait Gallery and National Museum of American History, English Heritage-UK, and the Atlanta History Center.

The Courage of a Fox: Francis Marion and the War of Independence by Ken Johnson

In The American Crisis, published December 19, 1776 and read aloud to the Continental Army on December 23 (days before the Battle of Trenton), 18th century Enlightenment philosopher and author Thomas Paine wrote:

“These are the times that try men’s souls: The summer soldier and the sunshine patriot will, in this crisis, shrink from the service of his country; but he that stands it now, deserves the love and thanks of man and woman.”

These words, written in some of the darkest days for the new United States of America during their War for Independence, say something about the nature of courage, of “taking heart” – namely that its essence is exemplified in attempting to sustain a cause in the face of what seems to be ruin and defeat. These words were equally as apt during another dark time of the war in 1780 when after the fall of Charleston and the disastrous defeat at the Battle of Camden Patriot prospects could not have been bleaker, and acts of courage in short supply.

A time had come for someone to exhibit what Napoleon Bonaparte reflecting on his campaigns of the early 1800s referred to as “two o’clock in the morning courage…unprepared courage, that which is necessary on an unexpected occasion, and which, in spite of the most unforeseen events, leaves full freedom of judgment and decision”. During the Patriots’ low point in the latter half of 1780 and beginning of 1781 it was time for someone to come forth in the crisis that was trying men’s souls and help the Patriot cause persevere through the unexpected occasion and unforeseen event – it was time for Francis Marion, a minor planter from an unassuming background to become the “Swamp Fox” of legend.

Francis Marion’s life prior to the American War for Independence wouldn’t necessarily give us an indication of the talents and resolve he would bring to bear in that struggle, although there are glimpses here and there. At age 16 he took ship on a venture of some sort, perhaps as a first step to a possible merchant/ship owner career – and on this, his first journey at sea, the ship sank in a storm. In this early instance of adversity Marion exhibited calmness and resilience in surviving several days lost at sea in an open boat before rescue. Later on, in the French and Indian War (as the European Seven Years War was called in North America), Marion displayed a capacity to do unpleasant duty with resolve in campaigns against the Cherokee – campaigns which would be condemned today and were acknowledged as stern business at the time, but were nevertheless considered necessary. So in this earlier period we can detect certain strands that will come to prominence in the American War for Independence – calmness, resilience, and resolve.

When the great cataclysm of war pitting colonies, and then newly United States, against British Imperial power did come in the 1770s, Marion at first won no special distinction –

Marion was one of scores of men of middling social standing serving a cause he believed in competently, but not spectacularly. He rose in rank mainly through the simple virtue of tenacity; he didn’t give up his commission through boredom or frustration as so many did and so progressed from Captain in the 2nd South Carolina Regiment in 1775 (serving with that rank in the defense of Fort Sullivan, modern day Fort Moultrie), to a Continental Army commission as Lieutenant Colonel in 1776, the rank he held when he took part in the unsuccessful 1779 French-American attempt to recapture Savannah, Georgia from the British. For Marion the two things that most stand out in this period are the oft-times drudgery of scouting duty and his solicitude for his men as most activity, aside from the action at Savannah, seemed to be scrounging provisions and hunting down deserters.

This would change in dramatic fashion in 1780. In the spring of that year a British military expedition under General Henry Clinton sailed to, and laid siege to, Charleston – which was captured in May of 1780. That Marion was not captured along with the other Continental and State forces is due to a chance occurrence – and one which illustrates his ability to get out of a tight spot. Shortly before the arrival of the British force Marion had attended a party, as social convention demanded; but when the host had the ballroom doors shut and locked, with the proclamation that no one could leave without drinking several toasts, Marion, a non-drinker, demurred – and leapt from the second-floor window, breaking his ankle in the process, but making good his escape! By leaving town to recuperate he avoided becoming prisoner of war with the rest of the Patriot forces in Charleston. His physical condition matched the military condition of his state – handicapped and with little prospect of success. But this is precisely when the unique courage of Francis Marion came to the fore as he left behind the relative drudgery of his previous service and became the Swamp Fox – quick to strike, always elusive, inflicting damage far exceeding his apparent strength, at home in wild, inaccessible places, and nimble in the open.

Whether it was for turning his base of operations at Snow Island into a byword to the British of “enigma”, securing the goodwill of his men and the civilian population by raiding Tory strongholds such as Waccamaw Neck and distributing 150 bushels of salt (the most precious commodity in the state), or leading the dreaded Banastre Tarleton through 26 fruitless miles of swamp (causing Tarleton to pen in a private letter “as for this damned old fox, the Devil himself could not catch him”), Marion earned this apt apotheosis from his commanding officer General Nathanael Greene:

“To fight the enemy with prospect of victory is nothing; but to fight with intrepidity under the constant impression of defeat, and inspire irregular troops to do it, is a talent peculiar to yourself.”

This was the unique courage of the Swamp Fox.

Quotes from, and about, Francis Marion

“My brave soldiers! I know you all, and have often witnessed your bravery. In the name of your country, I call upon you once more to show it. My confidence in you is great. I am sure it will not be disappointed. Fight like men, as you have always done–and you are sure of the victory.” – Marion to his men before going into one of the scores of skirmishes of early 1781

“To fight the enemy bravely with the prospect of victory, is nothing; but to fight with intrepidity under the constant impression of defeat, and inspire regular troops to do it, is a talent peculiar to yourself.” – General Greene to Marion, April 24, 1781 in a letter thanking him for his services

“I aim at no higher dignity than that of essentially serving my country.” – Marion’s response to being voted the thanks of the Continental Congress

“My brigade is composed of citizens, enough of whose blood has been shed already. If ordered to attack the enemy, I shall obey; but… Knowing, as we do, that the enemy are on the eve of departure, so far from offering to molest, I would rather send a party to protect them.” – Marion replying to a proposed attack on British forces in late 1782

“Then, it was war. It is peace now. God has given us the victory; let us show our gratitude to heaven, which we shall not do by cruelty to man.” – Marion’s reaction to a proposed bill in the South Carolina legislature for prosecuting former Loyalists

“If, I have given any occasion for complaint, I am ready to answer in property and person. If I have wronged any man I am willing to make him restitution. If, in a single instance, in the course of my command, I have done that which I cannot fully justify, justice requires that I should suffer for it.” – Marion’s response to a proposed bill that would give him and other irregular South Carolina militia forces exemption from prosecution for their actions during the War for Independence

“Death may be to others a leap in the dark, but I rather consider it a resting-place where old age may throw off its burdens.” – Marion contemplating his mortality in a letter in the early 1790s

“I can lay my hand on my heart and say that, since I came to man’s estate, I have never intentionally done wrong to any.” – Marion, shortly before his death in 1793, contemplating his life in correspondence with a friend.