The Birth of American Investigative Journalism 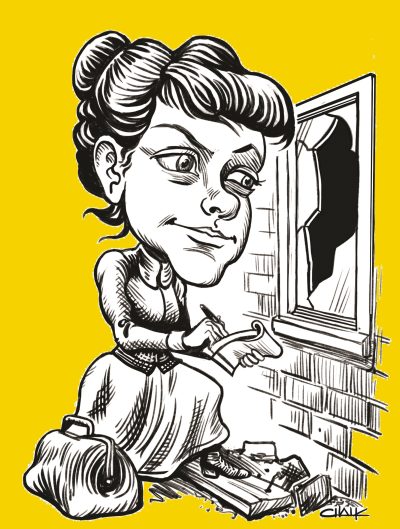 Clink here for information about joining us online.

Elizabeth Cochrane, better known as stunt reporter Nellie Bly, understood the importance of selective revelation in order to maintain a well-crafted public persona. Ms. Bly had many secrets: What was the true nature of her love interests? Was she a closet smoker with a fondness for a fine cigar? Historians do not tell us. A secret they do reveal is that Bly was chiefly an inventor and entrepreneur. She had the uncanny ability to identify a need, invent a marketable solution, and sell it. After marrying Robert Seaman in 1895, she inherited the Iron Clad Manufacturing Company when she was widowed in 1904. As owner and manager, she initiated a social welfare program for her employees, invented the 55-gallon steel drum, the stackable garbage can, and held twenty-five patents in her name. Yet it is her initial creation, the persona of Nellie Bly, whose eyewitness stunt reporting established Elizabeth Cochran on the world stage and catapulted her to fame, that provided what little financial security she, and the family to whom she was devoted, knew throughout her lifetime.

The Nellie Bly Talk is a part of the 2023 Library Talk Series celebrating a 25-year community collaboration between Greenville Chautauqua and the Greenville County Library System co-sponsoring talks about the historical figures that will appear in the June Chautauqua History Comes Alive Festival. 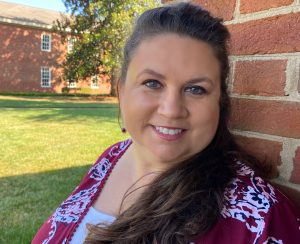 Mary Sturgill is an instructor and Media Specialist in the communication studies department at Furman University, as well as a filmmaker who owns her own production company, SheShed Productions.  She is a former news anchor, investigative reporter, and talk show host, with 20 years of experience.  Mary has won numerous awards for her journalism including two national awards from the Society of Professional Journalists. She is also the host of the Class E Podcast, a podcast produced in partnership with the Hill Institute for Innovation and Entrepreneurship at Furman University.

Elizabeth Cochran, better known as stunt reporter Nellie Bly, understood the importance of selective revelation in order to maintain a well-crafted public persona. Ms. Bly had many secrets: What was the true nature of her love interests? Was she a closet smoker with a fondness for a fine cigar? Historians do not tell us. A secret they do reveal is that Bly was chiefly an inventor and entrepreneur. She had the uncanny ability to identify a need, invent a marketable solution, and sell it.

The oldest daughter of Michael Cochran and Mary Jane Kennedy, Cochran/Bly lost her father suddenly at the age of six. After struggling for two and a half years, and finding the life of a widow and single mother socially unacceptable, Mary Jane Kennedy eagerly accepted the proposal of John Jay Ford. Ford proved to be an abusive drunkard. Mary Jane endured the marriage for 6 years before she petitioned for divorce.

This event, historian Brooke Kroeger writes, made Cochran/Bly see herself as responsible for everyone else’s wellbeing, the one who could right this seeming injustice, and every other one she ever encountered. She and her older brother Albert took the stand on their mother’s behalf and at the age of fourteen, Cochran gave her first eye witness report and assisted in winning her mother’s freedom. Seeing her mother so helpless, Cochran/Bly resolved to be self-reliant and took upon herself the role of her mother’s champion and protector.

Cochran/Bly set out to educate herself in pursuit of a teaching degree. She enrolled in Indiana Normal School (as Elizabeth Cochrane – adding a letter to her last name), completed a semester, and then confronted the unfortunate reality that she did not have funds – they had mysteriously disappeared. She returned home and tried her hand at what was available to her – tutoring, nannying, even housekeeping – with little success. Her brothers, meanwhile, with even less formal education, were able to attain white collar positions as clerks and managers.

Cochrane’s daily job search and love of a good story is what inevitably led her to read Erasmus Wilson’s incendiary article in the Pittsburg Dispatch entitled What Are Girls Good For? Wilson claimed that young woman should remain at home and learn to be obedient wives and mothers rather than wreaking havoc in the workplace. Elizabeth dashed off an outraged rebuttal – deemed illegible by many – that caught the eye of Dispatch editor George Madden. Madden hired Cochrane because he clearly saw in her a young woman who would dare to voice what others would not, and was willing to take great risks to do so. He was not wrong. Cochrane, impassioned by her mother’s divorce, penned Mad Marriages; she wrote of the working girl’s plight, and when she was barred from the factories because she was a reporter, she entered undercover. Madden plucked her nom de plume from a famous song by Stephen Foster (though the name got misspelled), and thus, crusading stunt reporter Nellie Bly was born.

Bly knew that in order to keep her byline on the front page she had to have a unique attack. Contrary to popular belief, she did not write of the hideous conditions of the workplace; rather, she revealed the limited opportunities offered to young women like herself that bound them and their children to a lower-class lifestyle. She captivated her audiences with one-on-one interviews with women “seeking a mash” – the equivalent of a present-day hookup – to divert themselves from their daily drudgery; offered firsthand accounts of foremen compelled to employ nine- and ten-year-olds when their mothers came, tears in their eyes, begging them to take them on; and she profiled young factory workers who themselves were uncertain of their own ages. She suggested that something be done to provide education and assistance to poor working girls and gave voice to the voiceless. As her popularity with the working masses grew, so did the discomfort of the Dispatch’s advertisers – Nellie was soon asked to write the fashion column. Instead, as she would do throughout her lifetime, Bly decided to re-invent herself. She became one of America’s first female foreign correspondents, penning a social column rich in travel, fashion and local color: Six Months in Mexico.

It was this pattern of marketable invention that maintained Bly throughout her lifetime. Upon her return from Mexico – when people attempted to credit her work to her older brother Albert – Bly traveled to New York and successfully proposed to The New York World that they publish an undercover expose of the lunatic asylum at Blackwell’s Island. Published in 1887, Ten Days in a Mad-House dramatically reformed the treatment and care of the mentally ill. It also established Bly as a reporter of significant importance and ushered in a whole new era of investigative stunt journalism.

Bly’s later years, unbeknownst to many, contained great challenges, which she greeted, in typical fashion, with her inventive solutions. Bly married Robert Seaman in 1895, a man 35 years her senior, and owner of the Iron Clad Manufacturing Company. Her marriage was not a happy one, so it was no mistake that she chose to interview Susan B. Anthony in 1896 and pose direct questions to her about love and marriage. Seaman died in 1904, and Bly inherited the business and became its owner manager. She initiated a social welfare program for her employees, invented the 55-gallon steel drum, the stackable garbage can, and held twenty-five patents in her name.  Yet Iron Clad was forced to file for bankruptcy and close its doors in 1913.

Therefore, in 1914, with the outbreak of World War I, Bly launched yet another new career, this time as a war correspondent for The New York Evening Journal. She died on January 27, 1922, financially bankrupt, but rich in what few women of her day could ever hope to possess: world-wide respect and admiration.

1885 – 1886  Works at the Pittsburgh Dispatch; publishes Mad Marriages, her first article to carry the Nellie Bly byline; begins stunt reporting and writes a series of articles on working women; travels to Mexico as a foreign correspondent and writes Six Months in Mexico.

1887 – 1890  Wins a job at The New York World. Has herself committed to the insane asylum at Blackwell’s Island and writes an eyewitness expose; goes undercover and exposes corrupt lobbyist Edward Phelps; completes a record -breaking round-the-world trip for The New York World in 72 days, 6 hours, 11 minutes, and 14 seconds.

1890  Leaves The New York World and pursues other writing projects, including novels written in weekly installments for The New York Family Story Paper. Completes and publishes Nellie Bly’s Book: Around the World in 72 Days.

1894, 1896  Covers the Pullman Railroad strike and interviews Susan B. Anthony for The New York World.

“Energy rightly applied and directed will accomplish anything.”

“I finally worked out the steel package to perfection, patented the design, put it on the market and taught the American public to use the steel barrel.”

“Do you think a company or regiment of men soldiers led by a woman would ever dare run away? The wars of the future must and will be planned and officered by women. There is no mistaking the way the hands on the signboards point.”

The most detailed up close and personal look at the woman behind the persona to date. This book, with its insightful observations, is a gem of a read.

A great book written in broad strokes for the middle schooler in all of us. Complete with timeline, period illustrations and photo references.

An inside look in Nellie’s own words of one of the greatest feats of investigative stunt reporting ever accomplished.

A lyrical travel journal by one of America’s first female foreign correspondents.

A unique perspective on the world of the 1890’s from one of its most passionate journalists.

Register for Event: Nellie Bly Talk led by Mary Sturgill. This event is a discussion not an in-character performance. Hughes Main Library or Join Us Online. FREE.