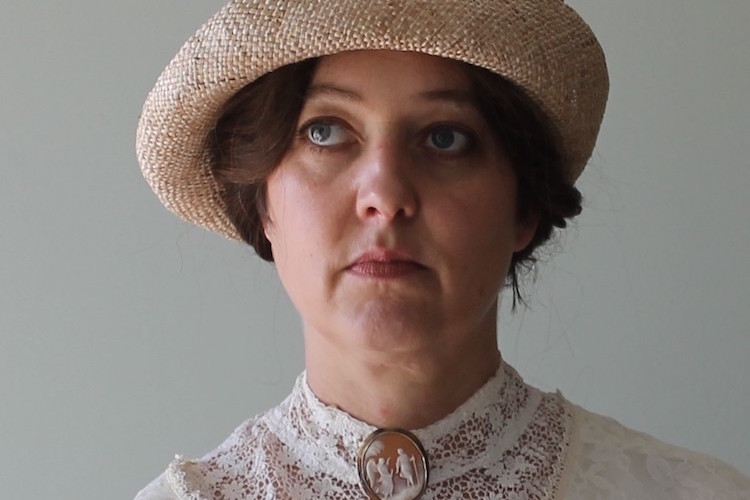 How did a nice young Quaker woman with BA from Swathmore and an MA & PhD from U Penn, end up being force fed in a city jail and confined to a prison psychiatric ward? As the psychiatrist who examined her said: “Courage in women is often mistaken for Insanity.”

Alice Paul and her “Silent Sentinels” were beaten, jailed and force-fed on their crusade to obtain the right to vote for American women. Their charge for arrest: blocking traffic. In 1923 she proposed an Equal Rights Amendment to the Constitution. She fought for it until her death in 1977. A revised version was passed by Congress in 1974, but has yet to be ratified.

Leslie Goddard, PhD, is an award-winning actress and scholar who has been presenting history lectures and portraying famous women in history for more than ten years. Each year, she presents more than 250 programs, appearing at public libraries, museums and historic homes, professional associations, colleges and universities, and corporations.

A resident of the Chicago area, she holds both a master’s degree in theater and a doctorate in American studies and women’s history. A former museum director, she is the author of two books on Chicago history and currently works full-time as a public speaker, living-history presenter, and author. www.lesliegoddard.info

Little in Alice Paul’s quiet, comfortable Quaker upbringing suggested she would become a leader of the militant wing of the largest movement for political change in U.S. history and a pioneer of nonviolent social protest.

Born in New Jersey in 1885, she was raised with a sense of gender equality. “When the Quakers were founded,” she said, “one of their principles was and is equality of the sexes. So I never had any other idea.”

After graduating from Swarthmore College, she studied in England and joined the militant wing of the British suffragette movement, enduring arrest and imprisonment. She returned to the U.S. in 1910 fired up for the cause.

Paul launched her American suffrage work by organizing a parade on March 3, 1913, the day before Woodrow Wilson’s inauguration. The parade disintegrated as spectators began harassing marchers, attacking them, and pulling women off floats. The spectacle and violence made front-page headlines.

In 1914, she launched her own suffrage association, the Congressional Union for Woman Suffrage and then an independent political party, the National Woman’s Party, both committed to a constitutional amendment enfranchising women and to publicity-driven, nonviolent action.

Paul’s remarkable ability to inspire drew followers to her and aroused them to courageous action.  Although tiny and frequently in poor health, she was a tireless worker who fearlessly put herself on the line and rarely sought personal acclaim.

On January 10, 1917, Paul launched her most daring tactic. She organized volunteers to stand outside the White House, holding banners in the Congressional Union’s white, yellow, and purple and with questions such as, “Mr. President, How Long Must Women Wait for Liberty?”

No one had ever before picketed the White House. Some, including Wilson, coldly ignored them. A few complemented them. Many accused them of being undignified, petty, and distinctly unladylike.

When the United States entered World War I that April, opinions intensified. Many now saw the picketers as unpatriotic and even disloyal. Crowds began to gather, shouting insults, and eventually shoving or attacking the picketers.

In June, picketers began to be arrested for “obstructing traffic” and imprisoned, usually at a workhouse in Virginia. But the picketing continued, as did the arrests and the prison terms, which gradually increased in length. Imprisoned suffragists resisted prison rules, which drew increasing brutality.

By late summer, suffragists, including frail, older women, were being beaten, pushed and thrown into cold, unsanitary cells. When Paul herself was arrested, she was sentenced to a staggering seven-month jail term. She immediately organized a hunger strike. Prison officials responded by force-feeding Paul and several other strikers in a tortuous method.

Finally, in 1919, both houses of Congress passed the women’s suffrage amendment. A little more than a year later, the required thirty-six states ratified it, and it was signed into law on August 26, 1920.

For Paul, the fight was not over. In 1923, she authored the first version of the Equal Rights Amendment, which she would champion until her death.

Paul lived to see Congress pass the ERA in 1972. But she suffered a stroke in 1974 and died three years later at the age of 92, too soon to know the ERA would not be ratified.

Alice Paul is not widely remembered today, but recently she has been receiving new interest. The 2014 HBO movie Iron-Jawed Angels told her story, with Hilary Swank playing Alice Paul.

And in 2016, the Treasury announced plans to redesign the back of the ten-dollar bill with a depiction of the 1913 women’s suffrage parade she organized and with portraits of five suffrage leaders – including Alice Paul.