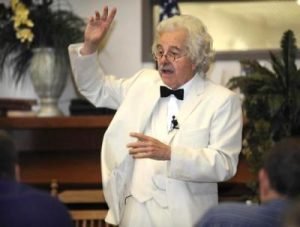 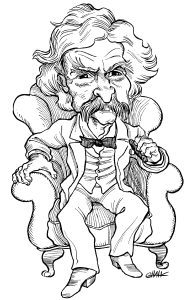 Mark Twain was arguably America’s first celebrity. Everybody knows Mark Twain. He is the most quoted humorist ever. His fictional characters, Tom Sawyer, Huckleberry Finn, Becky Thatcher are more fondly remembered than most American presidents. It has been said of the influence he has had on our language, “Mark Twain wrote the way we talk, and now we talk the way he wrote.”

At age 70, at the height of his fame, Mark Twain began to advertise his presence everywhere he went by wearing white suits in winter as well as summer. The secrets this man revealed were as carefully crafted as his art and as his personality. 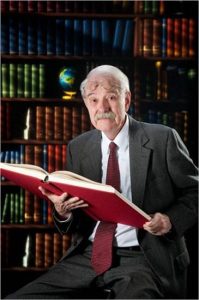 George Frein, PhD began to do Chautauqua in 1986 while teaching in the Philosophy and Religious Studies Department at University of North Dakota. During the summer season, he traveled with groups of four or five other scholars to towns all across the Great Plains, doing week-long programs supported by the National Endowment for the Humanities and its state partners. George portrayed Henry Adams, Herman Melville, and Mark Twain. At 65 George retired from the University and moved to Greenville, but he kept doing Chautauqua. Over the next 25 years he added to his cast of characters: John Adams, Abraham Lincoln, Dr. Seuss, Harry Truman, Carl Jung, Erich Maria Remarque. Now 90, George has outlived all of his characters. Instead of performing, George now teaches at the Chautauqua Training Institute, an online project of Humanities North Dakota, where younger scholars are preparing to carry on the Chautauqua tradition.

Mark Twain had been keeping secrets his whole life. He began, he said, on his first birthday and went on collecting them, year after year, until his seventieth birthday.

Seventy was a lavish birthday party, with 170 guests at Delmonico’s in New York City. In his after dinner speech, Twain revealed the most sought after secrets of his long life.

Everybody asked him, he said, how he made it all the way to seventy. “What is your secret?”

His first secret was about his sleep habits. He said: “I have made it a rule to go to bed when there wasn’t anybody left to sit up with; and I have made it a rule to get up when I had to.” Twain boasted that this habit brought him a unique sort of good health. He told the guests: “This has resulted in an unswerving regularity of irregularity.” If ever there was a person characterized by the regularity of irregularity, Mark Twain was that person.

The second secret to his longevity, he revealed, was his diet. He said he ate whatever he wanted to eat – at least until recently. “But last spring,” he admitted, “I stopped frolicking with mince-pie after midnight; up to then I had always believed it wasn’t loaded.”

Twain’s third revelation was about smoking. “I have made it a rule never to smoke more than one cigar at a time.” That Twain smoked all the time was hardly a secret to anybody who knew him. Nor was it a secret that he gave up smoking, he said – “many times.” But, as he claimed, “It was just to show off and prove that I could do it and was not a creature of habit.”

“As for drinking,” the fourth secret he revealed to his birthday party guests: “I have no rule about that. When the others drink I like to help, otherwise I remain dry, by habit and preference.” That is what he told the crowd; but many guests, like Andrew Carnegie, who frequently drank with him, probably remember that he often said, “Too much whiskey is barely enough.” They likely thought, “This revelation hides a secret.”

Taking his medicine was his fifth secret. “Since I was seven years old I have seldom taken a dose of medicine, and have still seldomer needed one.” In other words he didn’t take his medicine.

Most old people who exercise do so on their doctor’s recommendation. Not Mark Twain. He told his guests, “I have never taken any exercise, except sleeping and resting, and I never intend to take any. Exercise is loathsome. And it cannot be any benefit when you are tired; and I was always tired.” And, he really was always tired. He wrote almost every day for eight or more hours, though he would have his readers believe that he just effortlessly and playfully dashed it all off, no sweat.

After carefully keeping that secret about his writing labors, Twain got to his favorite topic, one he often addressed on the lecture circuit. The topic was morals. To his birthday guests he revealed: “I have lived a severely moral life.” But, many of his guests probably recalled him saying that he’d rather teach morals than practice them – teaching, as he knew, was less trouble.

Twain was, nonetheless, a good teacher of morals. He once revealed a secret about morals, one which the most prominent figures in society kept carefully hidden. He made this simple distinction: “Morals consist of political morals, commercial morals, ecclesiastical morals, and morals.”

At his birthday banquet, Twain was also self-reflective. “Morals are an acquirement — like music, like a foreign language, like piety, poker, paralysis — no man is born with them. I wasn’t myself, I started poor. I hadn’t a single moral.”

Twain explained to those helping him celebrate his seventieth birthday that he took good care of his acquired morals. About one of those morals, he said this: “It was an old moral, an old second-hand moral, all out of repair, and didn’t fit, anyway. But if you are careful with a thing like that, and keep it in a dry place, and save it for processions, and Chautauquas, and World’s Fairs, and so on, and disinfect it now and then, and give it a fresh coat of whitewash once in a while, you will be surprised to see how well she will last and how long she will keep sweet, or at least inoffensive.”

That last statement, about taking care of one’s morals, is true even if it is not the revelation of a secret. It certainly is not a secret in Greenville, where Mark Twain has paraded his morals at no fewer than six Chautauquas!

Mark Twain ended his seventieth birthday address, exclaiming, “Threescore years and ten! It is the Scriptural statute of limitations.” In other words he ends up thinking his adventures are coming to an end. He said, “I am seventy; seventy, and would nestle in the chimney-corner, and smoke my pipe, and read my book, and take my rest.”

But then, after his birthday banquet, Mark Twain went home and changed his mind. He discovered he had perhaps more secrets to reveal and certainly more adventures to have. After all, he was only seventy!

1857 He pilots steamboats on the Mississippi.

1861 Sam flees the draft and goes west to Nevada and California.

1876 The Adventures of Tom Sawyer.

1906 At a congressional committee hearing Twain begins to wear a white suit.

“Laughter without a tinge of philosophy is only a sneeze of humor. Genuine humor is replete with wisdom.” — 1999 when the theme was American Humor

“A Southerner talks music. At least it is music to me, but then I was born in the South.”

“The educated Southerner has no use for the letter R except at the beginning of a word. A gentleman just now said to me: ‘I had the honah of having dinnah with the gov’nuh befo’ the wah.’ ” – 2000 when the theme was Southern Writing.

“I am busy writing an impromptu curtain speech. I need to have it ready for opening night. As you may know it takes at least three weeks to put an impromptu speech together.” “Ah, well, I am a great & sublime fool. But then I am God’s fool, & all His works must be contemplated with respect.” – 2007 when the theme was America on Stage.

“A man with a new idea is a crank until the idea succeeds.” “We are called the nation of inventors. And we are. We could still claim that title and wear its loftiest honors if we had stopped with the first thing we ever invented, which was human liberty.” — 2011 when the theme was Ideas that Changed America.

“You don’t know about me, without you have read a book by the name of ‘The Adventures of Tom Sawyer,’ but that ain’t no matter. That book was made by a Mr. Mark Twain, and he told the truth, mainly.” — 2016 when the theme was American Adventures

“The secret source of humor is not joy but sorrow.” — 2023, now that the theme is secrets revealed.

It’s no secret: Mark Twain’s books are classics that reveal the American character. And that is as true today as it was when they were first published in the 19th century.

But where to start reading Twain? I suggest you couldn’t do better than to begin with Mark Twain: Mississippi Writings in the Library of America, a beautifully made collection of great American writers. This volume contains, The Adventures of Tom Sawyer (1876)*, Life on the Mississippi (1883)*, Adventures of Huckleberry Finn (1885)*, Pudd’nhead Wilson (1894)*(Library has all books but not the collection). Four novels in one volume is a good buy too.

Not exactly a secret, but not as well known as Twain’s novels are his shorter works. The Library of America has the best available edition in its two-volume Mark Twain: Collected Tales, speeches, and Essays.

The biggest collection of secrets that Mark Twain revealed about himself can be found in his massive three volume posthumous autobiography.* It can be recommended only to professional detectives: there are a lot of secrets, but buried under so many, many pages!

Read Twain for the secrets you can find in him. But I recommend you also read some of the detectives/scholars who have worked on his case:

Ron Powers, Dangerous Water: A Biography of the Boy who Became Mark Twain (1999)*. This is a revelation of secrets boys kept on the American frontier.

Ron Powers, Mark Twain, a Life (2005)*. The secret here is how well the child Sam lived on inside Twain’s adult life.

Everett Emerson, Mark Twain, a Literary Life (2000)*. This is a revelation of just how deeply Twain was committed to his work as a writer.

Michael Shelden, Mark Twain: Man in White Suit, the Grand Adventure of His Final Years (2010)*. It is not a secret any more that old people can have grand adventures. This is perhaps the biggest reveal of Mark Twain.