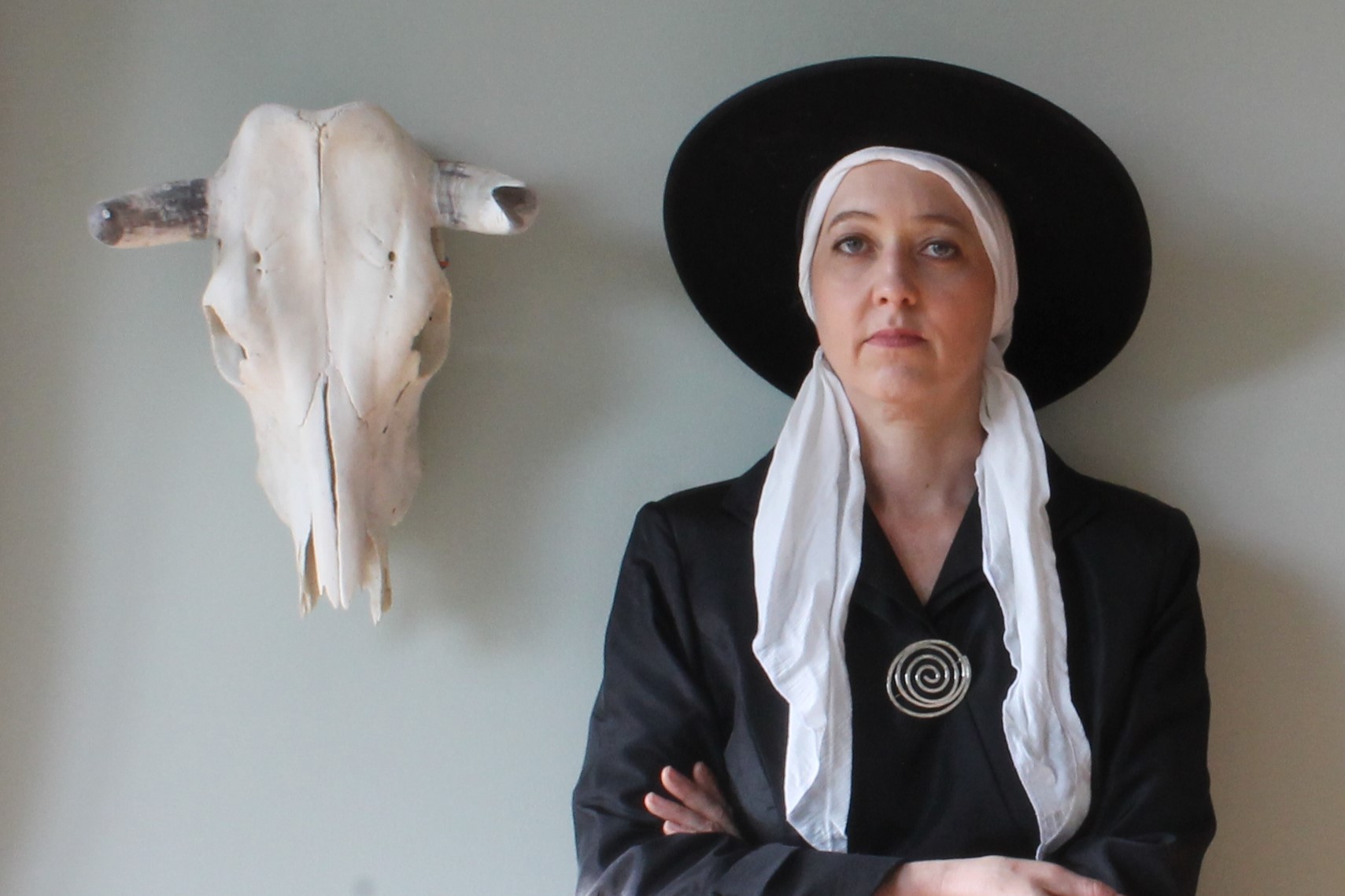 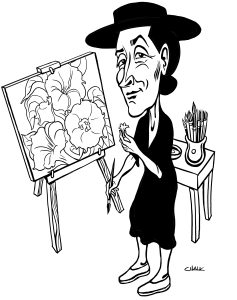 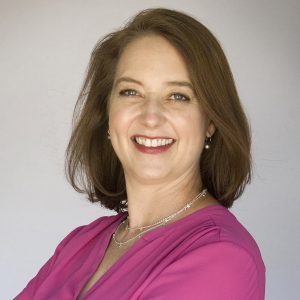 Leslie Goddard, Ph.D., is an award-winning scholar and actress who has been portraying women in history and presenting history lectures for nearly twenty years. She holds an interdisciplinary Ph.D. from Northwestern University as well as master’s degrees in both museum studies and in theater. A former museum director, she is a lifetime resident of the Chicago area and currently works full-time as a public speaker, actress and author. Her presentations have been seen by audiences in more than thirty states, including scores of universities, museums, libraries, and Chautauqua festivals.

“I’ve been absolutely terrified every moment of my life – and I’ve never let it keep me from doing a single thing I wanted to do.” Georgia O’Keeffe

It was also the latest evidence of the enormous popularity of one of America’s most celebrated artists. O’Keeffe’s works hang in more than forty museums, and posters of her paintings are among the most popular art reproductions available. The Georgia O’Keeffe Museum in Santa Fe, New Mexico, draws thousands of visitors annually.

Given O’Keeffe’s popularity today, it can be hard to conceive the challenge she took on when she told a friend at age 11, “I’m going to be an artist.” She later admitted she’d never even heard of a woman artist. Born in 1887, she grew up on a farm near Sun Prairie, Wisconsin. Her schoolbooks never mentioned female artists.

She faced the challenge head-on, first studying traditional art techniques at the School of the Art Institute of Chicago and the Art Students’ League in New York and then working as an advertising illustrator and art teacher. But she felt constrained when encouraged to copy other artists’ styles and sought an alternative to established ways of thinking about art.

While working as an art teacher in Texas in the 1910s, O’Keeffe began exploring her own style in a series of abstract charcoal drawings. In 1915, she sent some of these charcoals to a friend, Anita Pollitzer. Pollitzer, unbeknownst to O’Keeffe, showed them to Alfred Stieglitz, the art dealer and well-known photographer. His New York art gallery, 291, was dedicated to showcasing works by cutting-edge European artists of the day and encouraging America’s own modernist artists. Impressed, Stieglitz put some of O’Keeffe’s charcoals in a group exhibition.

It was a transformative movement for O’Keeffe, who found in Stieglitz a supportive champion and friend. She soon became the only woman in the group of American modern artists informally known as the Stieglitz circle.

In 1917, Stieglitz organized the first of twenty solo exhibitions he would do for her. The next year, he convinced her to move to New York and they eventually married. She frequently served as a model for him, posing for some 500 photographs by Stieglitz between 1917 and 1937.

In the 1920s, her own style continued to evolve as she painted abstract and magnified images of flowers, skyscrapers, and barns. Her lush, oversized flowers such as Black Iris (1926) and Oriental Poppies (1928), distinguished by their long, continuous brushstrokes and clear, vivid colors, remain favorites of her fans.

Critics often read her flower paintings through a sexualized, Freudian lens, a view she resisted. Throughout her life, she chafed against attempts to impose gendered interpretations on her art, aiming always to attain recognition as a great artist, not a great female artist.

O’Keeffe’s life changed again in 1929 when a friend invited her to spend the summer at a New Mexico ranch, where she fell deeply in love with the landscape. The crystalline light brought out astonishing colors in the terra-cotta hills of smoked red, sun-bleached yellow and soft lavender, while the broad sky gave her the open space she craved. “[A]s soon as I saw it, that was my country,” she said. “It fitted to me exactly.”

O’Keeffe began spending a portion of each year in New Mexico, “tramping” through the hills with canvases and paint. She bought a small adobe summer house at the stunningly situated Ghost Ranch in 1940 and another in the small village of Abiquiu in 1945. Although this raised a new challenge in O’Keeffe’s life, as her marriage strained under the pressure of her absences and his infidelities, her sense of what she needed prevailed.

O’Keeffe’s paintings of horse skulls, cow pelvises, and desert scenes soon became trademarks of her style. Like her oversized flower paintings, her New Mexico paintings fluctuate between the representative and the abstract. She zooms in on a view, magnifying its abstract shapes and simplifying its lines while heightening its colors to bring out an emotional effect.

The Museum of Modern Art in New York City mounted an O’Keeffe show in 1946, its first exhibition of a woman artist ever. Stieglitz died the same year. After wrapping up his affairs, O’Keeffe moved permanently to New Mexico.

O’Keeffe lived simply in New Mexico, splitting her time between her Ghost Ranch and Abiquiu homes. She grew her own vegetables, hand-ground wheat for bread and took long walks in the hills. She began to travel internationally, incorporating scenic vistas from Peru, Japan and other spectacular places into her art. Air travel inspired her to begin painting a series of aerial views of clouds and sky.

By the 1960s, Georgia O’Keeffe’s fame was firmly established, and major museums across the United States mounted exhibitions of her works. She received the Presidential Medal of Freedom in 1977.

O’Keeffe began have eye trouble in the late 1960s. By 1971, she had lost all her central vision due to macular degeneration. Although virtually blind in her later years, she continued to create art until her death in 1986, at the age of 98.

She had not merely met the challenge; she had exceeded it. Her career as an artist spanned 70 years and resulted in more than 2,000 works. She is remembered today as one of the founders of modern art and a principal figure of American modernism.

1918 – Moves to New York; moves in with Alfred Stieglitz

1934 – Begins spending half her year in New Mexico

“I’ve been absolutely terrified every moment of my life – and I’ve never let it keep me from doing a single thing I wanted to do.”

“To create one’s world in any of the arts takes courage.”

“I decided that if I could paint that flower in a huge scale, you could not ignore its beauty.”

“If you take a flower in your hand and really look at it, it’s your world for a moment.”

“Nobody sees a flower really; it is so small. We haven’t time, and to see takes time.”

“Sun-bleached bones were most wonderful against the blue – the blue that will always be there as it is now after all man’s destruction is finished.”

“I found I could say things with color and shapes that I couldn’t say any other way – things I had no words for.”

* Full Bloom: The Art and Life of Georgia O’Keeffe, by Hunter Drohojowska-Philp. 2005. Detailed biography by an art journalist, great insights into O’Keeffe’s art.

Georgia O’Keeffe, by Georgia O’Keeffe. 1974. Oversized book packed with stunning images of her art. Not a full autobiography, but delightful and insightful commentary.

Portrait of an Artist: A Biography of Georgia O’Keeffe, by Laurie Lisle. 1980. Repr., Washington Square Press: 1997. The first comprehensive biography of her. My favorite O’Keeffe biography.

* Georgia O’Keeffe (Getting to Know the World’s Greatest Artist) by Mike Venezia. 1993. Fun elementary-aged children’s book. Intersperses images of O’Keeffe’s art with whimsical cartoons and a biography of her life.

Carolina Stories, Georgia O’Keeffe: A Woman on Paper, https://www.scetv.org/stories/2020/georgia-okeeffe-woman-paper. O’Keeffe has distinctly South Carolina roots. In 1915, she accepted a teaching position at Columbia College, Columbia SC. It was here that she created a unique series of charcoal drawings, abstract images in black-and-white that were nothing like she had ever done. She sent them to her friend Anita Pollitzer of Charleston, SC who showed them to Alfred Stieglitz, owner of the premier modern art gallery in New York. Stieglitz exclaimed: “Finally, a woman on paper!”