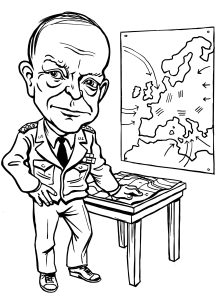 The Eisenhower presidency led the nation through both the darkest years of the Cold War as well as the Red Scare fanaticism of Joseph McCarthy, the rapidly escalating Civil Rights Movement and the burgeoning military industrial complex.

But before Eisenhower was a President, he was a General – not just any General but the Supreme Commander of the polyglot Allied forces.

And before World War II could end, he’d have bring together the land, air and sea forces of the coordinated efforts of 12 nations in what became known as the largest invasion force in human history. He’d have to maintain control of national egos, his own temper, supply chains and even the weather.

Failure was not an option. 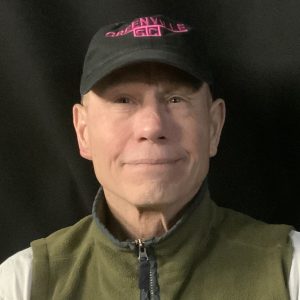 Since 1993 Doug has been nationally recognized for bringing “history to life.” Doug has presented figures from Nikita Khrushchev to Theodore Roosevelt, to Ernie Pyle, and P. T. Barnum. He has made over 800 first person presentations of over 30 historical figures, including Stonewall Jackson, Henry Ford, Pablo Picasso, and now Dwight D Eisenhower, Nikola Tesla, and Gene Roddenberry.

The voices in his head keep him busy, but also in the last four years he has been the Founder & Managing Artistic Director of Restless Artists’ Theatre. When not in the theatre or doing his characters, Mishler has taught American Cultural history for over 20 years. Like his idol Teddy Roosevelt, Doug believes there is still plenty of time to grow up and get a “real job”—but later!

Raised in Abilene Kansas to very devout parents, Ike learned discipline, hard work, and a strong sense of duty.  Though he had a softer side, and even a wild one, few people knew how driven Ike was to prove himself over and over again. Whether climbing military flag poles or commanding the D-Day landing, it seemed the greater the challenge, the more he thrived.  While never boisterous like his friend George Patton, nor bombastic like his mentor Douglas MacArthur, Ike had a relentless desire to be in the midst of the action. He just wanted to take on and to handle whatever was the next difficult, dangerous, or challenging situation.

Ike led a rather stable and religiously focused youth in Kansas.  He was an athlete especially good at football since he loved the competition and the camaraderie of teamwork. Yet in Kansas he secretly walked on the wild side, as he was mentored–as he would be so often in his life–by several older men who taught him to be tough, a good shot, to cuss and smoke (traits that his parents condemned) and take on dares as a mark of manliness. At age 17 he wanted more, and the military seemed perfect. To the horror of his parents, he was appointed to West Point.

As he graduated from West Point in 1915, Ike was just an average student, but he excelled as a charismatic and decisive leader. Because peace time service was not particularly adventurous, he became a rather rambunctious 2nd Lieutenant who was always in trouble. He calmed somewhat when he married socialite Mamie Doud, but his desire for action never cooled. Though anxious to fight in The Great War, Ike’s ability to organize and handle dozens of details simultaneously made him more valuable behind a desk at headquarters. So he was kept home while his friend George Patton went off to glory. Ike seethed but still served with excellence as aide to mentor-Generals Fox Conner, Pershing, and MacArthur — and he moved up the military ladder. When he deemed the work too dull, he often thought about resigning his commission. But he kept at it, and by 1941 he was a brigadier general working directly for his new mentor, Chief of Staff George C. Marshall.

As WWII commenced, he was kept in Washington again. Just as he considered resigning, Marshall finally sent him into action to command the invasions of North Africa and Sicily.

When the Allies combined forces for the Normandy Invasion, there were several candidates for Supreme Allied Commander. Ike was not a popular pick with more senior commanders, but Marshall trusted him to do what was necessary militarily without grandstanding. Ike didn’t have as much battlefield experience, but he was a genius at logistics and organization. Plus, he had the strength of character, toughness, and tact to handle the job — and the other generals.

As Supreme Commander, Ike had hard decisions to make. There were the prosaic but crucial logistic and supply challenges of hundreds of thousands of men fighting thousands of miles from production/supply centers. Harder was the titanic political challenge balancing Stalin against FDR against Churchill against De Gaulle. And this gargantuan political challenge paled before the challenge of handling the Prima Donnas he faced in the military, from Patton to Montgomery to De Gaulle, and even Omar Bradley. Then there was the personal anguish from every decision that sent young men to their deaths. Ike smoked, worried — and kept going.

After the war, Ike took on prestigious positions, but became restless with peacetime service. He served as Army Chief of Staff (1945–1948), as President of Columbia University, and then as the first Supreme Commander of NATO. 1952 was a Presidential Election year. Ike felt he had to run – that only he could bridge the two parties. He was the Centrist: able to counter the Conservatives who wished to go backwards, and to counter the Liberals who wanted to go too far. He was overwhelmingly elected, then re-elected by a landslide in 1956.

The Cold War was raging, bringing a host of foreign crises. He was instrumental in shoring up NATO and creating a host of other strategic alliances to contain the challenge of communism. In 1953, he forged an end to the seeming endless Korean War. He masterfully maintained world peace during the Berlin Airlift as well as the Suez & Hungarian crises.

Though he had amazing rates of success, even he might admit he failed against “Third World” challenges, commencing American involvement in Vietnam as well as instigating CIA actions that literally “killed” democracies in Iran, Guatemala, Congo, and Cuba — where he instigated what became JFK’s fiasco at the Bay of Pigs.

Domestically, he slowly confronted the red scare fanaticism of Joe McCarthy, but brilliantly created America’s Interstate Highway system, and oversaw an economy of unprecedented growth.  Though Ike was a moderate conservative he continued many New Deal programs and even expanded Social Security —to the horror of many Republicans. During the immense challenge of Civil Rights, he grudgingly aided the movement by sending troops to protect black students at Little Rock in 1957. He also responded to the shocking news of Sputnik and the space race by establishing NASA and strengthening science education through the National Defense Act.

In his epic 1961 farewell address, Eisenhower begged the nation to “guard against the acquisition of unwarranted influence … by the military-industrial complex.”  He feared it would lead to a society that values arms over the nation’s well-being.

Whether in war or peace, Ike was a towering figure devoted to his duty to America.

March 1961 – President John F. Kennedy returned Eisenhower to active list of regular Army with rank of General of the Army from December 1944.

April 2, 1969 – Buried in the Place of Meditation at the Eisenhower Presidential Library in Abilene, Kansas.

JFK’s handling of the Bay of Pigs fiasco was a profile in timidity and indecision.

In WWII I was thrown into a whirlwind of war, duty, and prima donnas.

I do not like going today (to Normandie), but we have no choice. I hope it is the right one

You must look into the eyes of the men you are sending to die.

Humility must be the portion of any man who receives acclaim earned by the blood of his followers.

I do not give a damn about glory.

The USA must not become an occupying power in the seething Arab World–if we do, we will regret it.

We should never become involved inside Vietnam…they loathed the French and if we go in, they will loathe us.

I do not agree with the Court’s Brown vs School Board Decision, but my duty is to support the constitution and it will be upheld.

You can not legislate the evils out of men’s hearts.

War is the saddest of human activities.

Every gun that is made, every warship launched, every rocket fired signifies in the final sense, a theft from those who hunger and are not fed, those who are cold and are not clothed.

Under the cloud of threatening war, it is humanity hanging from a cross of iron.

If the Iranian people ever find out how the coup to allow the Shah to take control was led by the USA, we will lose all legitimacy in Iran.

*Eisenhower: Soldier and President, by Stephen E. Ambrose. 1991. A classic and still pretty interesting.  Plenty of great information and easy to read.  Goes a bit overboard in places especially about WWII as Ambrose loves to do, but some nice nuggets about his early military career.

*Eisenhower in War and Peace, by Jean Edward Smith. 2013. Very solid recent work that has lots of insights about his youth, his marriage, and his regular life, as well as his time in politics and the military

An interesting, strong work. Though primarily on his presidency, you get a real idea about the man and the issues he faced, and why he decided to do the things that he did — from hiring Nixon to fighting with Khrushchev. It’s all here.

This source really is solid in covering every aspect of the Eisenhower story from his youth, his Mennonite parents, his career, and even his passion for golf.