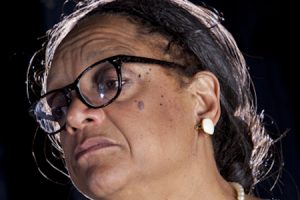 Sometimes when the status quo needs to be shaken up, it is necessary to take a stand. Other times, one must courageously keep one’s seat. Best known for being arrested for refusing to give up her bus seat, Parks was not an apolitical, middle-aged lady whose fatigue kept her seated. Hers was an act that radically challenged America to reinvent itself. 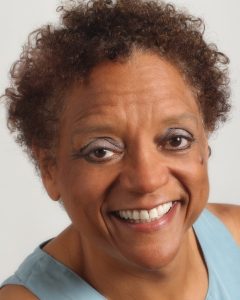 Becky Stone holds a BA from Vassar College in drama and a MA in Elementary Educational Counseling from Villanova University. She is a former teacher of theater and chorus and theater appreciation at Veritas Christian Academy in Fletcher, NC. While raising their four children, she helped her husband start GreenPrints Magazine, a garden quarterly. She continues as the Circulation Manager.

Becky has been a regular storyteller-performer at the Biltmore Estate for many years. She has performed as a storyteller at schools, libraries, and festivals throughout Western North Carolina, specializing in African-American, Appalachian, and world tales. She also researched, developed, and performed historical programs for the Center for Diversity Education in Asheville, The North Carolina Center for the Advancement of Teaching, the Asheville Contemporary Dance Theater, and the University of North Carolina at Asheville. She has also performed in several area theater companies.

Rosa had the heart of a warrior, but she needed more than heart to push for change. She had never talked about race outside of her family. Her husband was the first outsider with whom she had discussed those issues. She needed to learn that race issues needed to be publicly discussed if they were to find effective ways to work toward change. She did that during her 12 years as secretary of the Montgomery Chapter of the NAACP with E.D. Nixon as its president. Nixon was a Pullman porter. He talked like a workingman and understood the working person’s existence and took action on their behalf. He moved the NAACP from being a club of professionals who did not want to make too many waves to a group that championed everyone’s causes. He more than doubled the membership. Rosa, as his secretary, became his right hand assistant. She read, she wrote, sought affidavits, she went to meetings, she spoke at conventions. She learned how to confront with persistence. Nixon had heard from A. Philip Randolph, the founder of the Brotherhood of Sleeping Car Porters, “Nothing counts but pressure, pressure, more pressure and more pressure through broad, organized, aggressive mass action.” That became their mantra. Rosa helped Nixon run voter registration campaigns. She regularly led her Youth Council to the library to demand admittance, only to be refused time and time again. Rosa pressured the Montgomery Commissioners to allow everyone to see the Freedom Train so that her Youth Council could view the original documents of the promise of America – the Declaration and the Constitution. She joined Nixon in taking students to the white elementary school after school desegregation was supposed to end. She traveled to small towns in Alabama interviewing victims of racist violence – listening, encouraging – with the hope of taking legal action. She had begun to overcome her inherent fear and distrust of white people through work experiences at the Maxwell Air Force base and through white allies such as Clifford and Virginia Durr. It was Virginia Durr who facilitated Park’s attending a week long workshop on grass roots organizing at the Highlander Folk School in Tennessee. By 1955, Rosa was a respected and familiar leader in the black community.