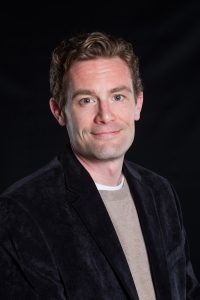 Jeremy Meier serves as the Chair of Fine and Performing Arts at Owens Community College in Northwest Ohio. He has directed nineteen student productions at the school including Shakespeare’s Twelfth Night and Romeo and Juliet as well as adapted and directed texts for the stage including Washington Irving’s The Legend of Sleepy Hollow and American Salvage by Bonnie Jo Campbell.

In addition to his portrayal of Robert Kennedy, Meier has created original solo performances for the Ohio Humanities on John Dillinger and Oliver Hazard Perry. In 2017, Meier was awarded a grant by Ohio Humanities to pilot the state’s first Chautauqua Training Program for new scholars learning to develop original figures based on historical figures.

Up to the Challenge by Jeremy Meier

“Few will have the greatness to bend history itself, but each of us can work to change a small portion of events, and in the total of those acts will be written the history of this generation.” — Robert F. Kennedy. To Seek a Newer World, 1967

The third son of Joseph P. Kennedy, Robert was born into an impressive family legacy. Even now when many people hear the name “Kennedy,” they first think of older brother JFK. For good reason, the excitement and interest in the New Frontier of the early ‘60s is tied to the dawning of the John F. Kennedy presidency.

When President Kennedy chose his younger brother as Attorney General, Robert Kennedy had already faced off with Jimmy Hoffa and the Teamsters during the Senate Rackets Committee hearings of the late ‘50s. As Attorney General, he vigorously enforced Civil Rights laws that protected African Americans.

He also was JFK’s closest Cabinet advisor and confidant. Not wanting to repeat the Bay of Pigs fiasco, JFK turned to him to think through all possibilities before making decisions.

Robert was in the heated decision room meetings during The Cuban Missile Crisis in October of 1962. As RFK recounts in his memoir Thirteen Days, the discussions were ongoing over twelve continuous days, and the Executive Committee of the National Security Council “met, talked, argued, and fought together during that crucial period of time.” In fact, President Kennedy was often not in these meetings as both he and Robert perceived that “personalities change when the President is present, and frequently even strong men make recommendations on the basis of what they believe the President wishes to hear.” Younger brother Robert possessed a dissenting voice to which the President was open to listen. Although first in favor of a calculated military strike of the Cuban missile sites, Robert’s perspective on the best plan of action shifted to the strategy outlined by Robert McNamara—a quarantine of Cuba until the missile sites were disassembled. President Kennedy agreed as well. It was a big risk, but it enabled what resulted in a diplomatic solution.

The two brothers sat in the Oval Office on day nine of the Cuban Missile Crisis as Russian ships were heading straight for the quarantine line. Robert’s descriptions of these moments highlight the tension in the room.

I think these few minutes were the time of gravest concern for the President. Was the world on the brink of a holocaust? Was it our error? A mistake? Was there something further that should have been done? Or not done? His hand went up to his face and covered his mouth. He opened and closed his fist. His face seemed drawn, his eyes pained, almost gray. We stared at each other across the table. For a few fleeting seconds, it was almost as though no one else was there and he was no longer the President. Inexplicably, I thought of when he was ill and almost died; when he lost his child; when we learned that our oldest brother had been killed; of personal times of strain and hurt. – Robert F. Kennedy. Thirteen Days: A Memoir of the Cuban Missile Crisis.

Events in the ‘60s shaped Robert both politically and personally:

Robert had been deeply affected by JFK’s assassination, and now he felt angry and frustrated with injustices he saw. When Lyndon Johnson withdrew his candidacy for a second term as President, Robert announced his own Presidential campaign. It was to be a search for decency, and he saw himself as an agent for change.

On the way to address a crowd of African Americans, he first heard of MLK Jr’s assassination. In breaking the news to them, he delivered a heartfelt speech revealing his own pain at his brother’s assassination. His plea to them not to turn to violence and hate was unforgettable. One of his favorite quotes was from Albert Camus:

“Perhaps we cannot prevent this world from being a world in which children are tortured. But we can reduce the number of tortured children. And if you don’t help us, who else in the world can help us do this?”

Robert’s 1968 presidential campaign included engagements at college campuses, rural villages, and major municipalities. He embraced the notion of being out among the people despite his shoes and his sport coat being ripped from his body on several occasions. He shrugged off advice that he maintain a safe distance from the crowds. One of his campaign workers compared his rallies to rock concerts.

On June 5, 1968, Robert F. Kennedy’s campaign for the presidency was tragically cut short. History asks, What might have been, had he finished the race?

1951-1952  Works as an attorney in the Criminal Division, Department of Justice.

1960  His book on experiences pursuing racketeering factions, The Enemy Within, is published.

August 22, 1964  Announces he will run for the senate, representing the state of New York. After a successful campaign, Robert Kennedy begins his tenure as part of the 89th Congress.

March 16, 1968  Announces he will to enter the primary race in pursuit of the Democratic nomination for the presidency.

April 4, 1968  Robert gives a speech in Indianapolis in which he informs the crowd that Martin Luther King Jr. had been that day assassinated in Memphis. He pleads for non-violence, forgiveness and healing for the nation.

June 5, 1968  After winning the important California primary, Robert is shot by an assassin in the Ambassador Hotel in Los Angeles. He perishes on June 6.

The final lesson of the Cuban Missile Crisis is the importance of placing ourselves in the other country’s shoes. October, 1962

We are stronger, and therefore have more responsibility, than any nation on earth; we should make the first effort—the greatest effort, and the last effort—to control nuclear weapons. We can and must begin immediately. June, 1965

War is not an enterprise lightly to be undertaken, nor prolonged one moment past its absolute necessity. March, 1968

* The Last Campaign: Robert Kennedy and the 82 Days that Inspired America, by Thurston Clarke. 2008. Clarke’s book chronicles a day-by-day account of Kennedy on the campaign trail in the spring of 1968. It features fascinating insights from the press pool who caravanned with the candidate.

Thirteen Days: A Memoir of the Cuban Missile Crisis, by Robert F, Kennedy. Reprint 1999. History looks back with a more nuanced perspective of the Cuban Missile Crisis, but for more than a decade that followed this first-person account from RFK was one of the only narratives available to the public. It is still a riveting account from the perspective of the man closest to President John F. Kennedy as he measured his options in a time of national crisis.

* Robert Kennedy And His Times, by Arthur M. Schlesinger. 2002. Schlesinger was the perhaps the biographer with the closest proximity to share the stories of the brothers Kennedy. His account of Robert’s life is detailed and provides a look at his life from boyhood through candidate for the office of the presidency.

*Matthews, Chris. Bobby Kennedy: A Raging Spirit, by Chris Matthews. 2017. Matthews’ follow-up to a 2011 biography on John F. Kennedy, this book hones in on Robert’s status of younger brother and family underdog. It has noteworthy viewpoints on how the younger brother pushed steadfast into adulthood as a fraternal loyalist and then found his own voice and ambition after the tragic event in Dallas in November, 1963.

*The Promise and the Dream: The Untold Story of Martin Luther King Jr. and Robert F. Kennedy, by David Margolick. 2018. At the corner of 17th and Broadway in Indianapolis stands a landmark composed of two statues—King and Kennedy—each with an arm extending toward the other. The assassinations of both men in the spring of 1968 have linked the two men in American History. This book investigates the visions of each man, the crossed paths and tentative relationship between these two men in the early sixties, their widows’ grief after the assassinations, and each man’s impact on social justice and equality in America.