This event has already occurred. The recording will be available through Friday August 20th only.

Living Historian Jon F. Rice introduces audiences to French-Canadian fur trader and voyageur, Francois Le Mai, as he and his friend Jean Baptiste Pointe DuSable arrive by canoe to early Chicago. Although finding nothing more than a little swamp filled with wild garlic and a muddy river running through it, businessman DuSable grasps the importance of that stream: “It’s location, my friend!”

Through music, song, and dance, we learn of the Métis-society (Creole culture,) and why DuSable, a fur trader of African descent and the “Father of Chicago,” abandoned his dream. 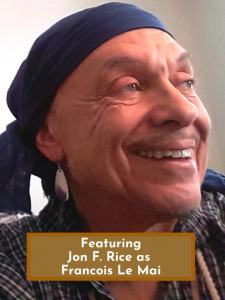 Jon Francois Rice is a Chicago-based triracial historian, performer, researcher, and interpreter. Dr. Rice obtained a Ph.D. in American History from Northern Illinois University. He is a retired Professor of African American History at Northern Illinois University and taught Native American History at UMass/Boston. Rice has performed for the Chicago Historical Society; as an interpreter for The Freedom Trail Foundation in Boston; and as a Wampanoag elder at the Wampanoag Homesite, at Plimoth Patuxet (formerly Plimoth Plantation).

Rice, who descends from the Choctaw Heritage, delves deeply into the lives and eras of his portrayals to create dialogues that encompass the time in which they lived.

Talk about the American Melting Pot! Jean Baptiste Point du Sable (Francois Le Mai’s brother Voyageur) is regarded as the first permanent non-Indigenous settler of what would later become Chicago, Illinois, and is now recognized as the “Founder of Chicago”.

Point du Sable was of African descent, but little else is known of his life prior to the 1770s. During his career, the areas where he settled and traded around the Great Lakes and in the Illinois country changed hands several times among France, Britain, Spain and the United States. Described as handsome and well educated, Point du Sable married a Native American woman, Kitiwaha, and they had two children. In 1779, during the American Revolutionary War he was arrested by the British on suspicion of being an American Patriot sympathizer.

Point du Sable is first recorded as living at the mouth of the Chicago River in a trader’s journal of early 1790. By then he had established an extensive and prosperous trading settlement in what later became the City of Chicago. He sold his Chicago River property in 1800 and moved to the port of St Charles, where he was licensed to run a Missouri River ferry. Point du Sable’s successful role in developing the Chicago River settlement was little recognized until the mid-20th century.