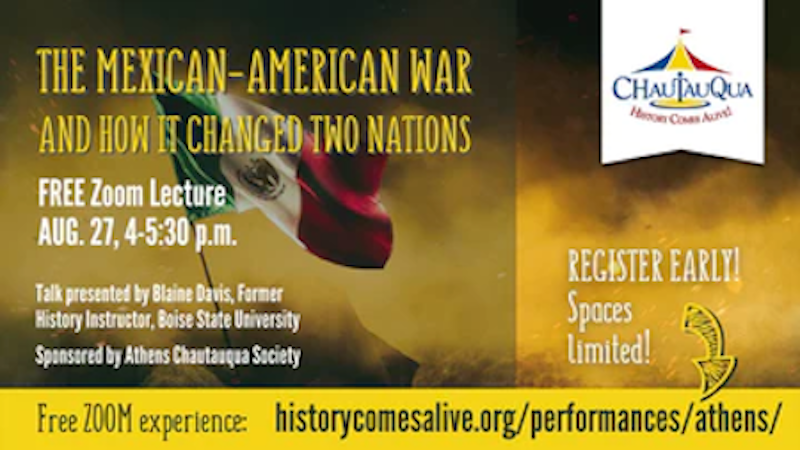 The Mexican-American War and How It Shaped Two Nations, presented by Blaine Davies

California and what is now the southwest United States became United States territory as a result of the Mexican War, or as many Mexicans perceive it, the “war where you stole our country.”  While the Treaty of Guadalupe Hidalgo cost Mexico over half of its territory, the United States added what became California, Arizona, Nevada, Utah, New Mexico and parts of Wyoming and Colorado.

Was it a war justified by “manifest destiny” and Mexican transgressions or was it essentially a land grab?

Overall, you will learn about the causes, the battles, and the aftermath of the Mexican War.

Please register in advance for this FREE Online event since enrollment is limited to 50 participants. If you have any questions, please email: athenschau@gmail.com

Blaine Davies has an MA in history and a BS degree in Business.  He taught United States history at Boise State University for 14 years.  Prior to that, he spent 20 years as a product marketing manager at Hewlett-Packard.  He enjoys researching, preparing and giving history lectures.  Blaine enjoys traveling and often reads historical novels in the same locations where the stories take place.